NBA Hall of Famer Dennis Rodman believes that 10-20% of all professional athletes are homosexual and they should come out. 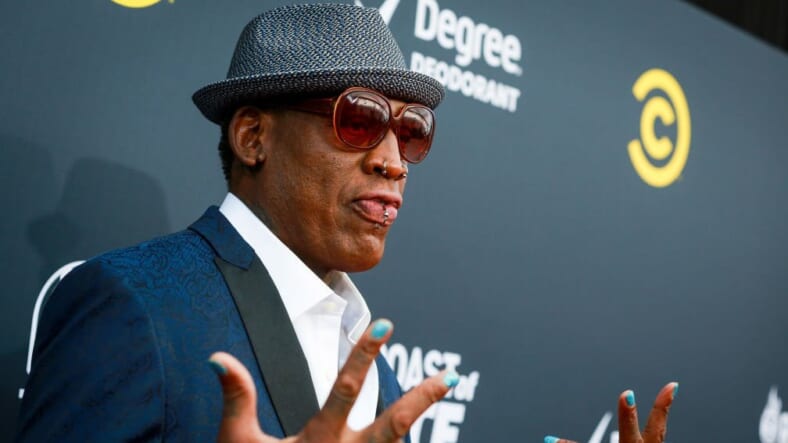 NBA Hall of Famer Dennis Rodman is still as outspoken and flavorful as when he played on the courts of the NBA; he believes that 10-20% of all professional athletes are homosexual and they should come out as revealed in his new ESPN documentary, Rodman: For Better of Worse.

In the four major sports leagues – NFL, NHL, NBA and and MLB in America, there are no openly gay athletes that play, however, Rodman could see that changing soon and people who enjoy and play in the sport would not be shocked.

“I don’t know why people haven’t came out before,” Rodman said. “It’s cool that people are coming out being, you know, gay or homosexual or whatever, lesbian and stuff like that.”

Rodman is currently promoting his ESPN 30-for-30 documentary, Rodman: For Better or Worse, which chronicles his storied career, including on the court battles alongside Michael Jordan and off the court tales like partying at gay clubs and dressing in drag.

While speaking with The Business Insider, Rodman states his Sports Illustrated article and cover from 1995 was important in opening conversation and opportunities for the LGBTQ community in sports. On the cover, Rodman appeared in black lingerie holding a parrot.

“They didn’t know the fact that when [they] shot that cover for the Sports Illustrated that that was the best-selling Sports Illustrated ever,” Rodman said. “And then the gay community started to reach out to me and said, ‘Wow, we never knew that our community can be represented like that in sports.’ And people didn’t know at the time that I was doing that.”

Rodman thought the cover would spark gay athletes to come out and thinks now if players began to come out, it wouldn’t shock people and it would “be more acceptable now than anything.”

“It don’t matter if [you’re in] sports or entertainer or actor or whatever in the world … Who cares? Okay. Who cares? You know, as long as he play and perform, does it matter?”

Rodman: For Better or Worse aired on Tuesday, September 10. It is also available on ESPN+.