Pose actress and transgender activist Angelica Ross has been tapped to host the 2020 presidential candidate forum on LGBTQ Issues this weekend in Cedar Rapids, Iowa.

GLAAD is sponsoring the event along with One Iowa, The Gazette, and The Advocate, and according to THR, presidential candidates Joe Biden, Cory Booker, Pete Buttigieg, Julián Castro, Tulsi Gabbard, Kamala Harris, Amy Klobuchar, Joe Sestak, Elizabeth Warren, and Marianne Williamson are confirmed to share their visions for LGBTQ acceptance and equality.

Ross will reportedly join GLAAD president and CEO Sarah Kate Ellis on stage to discuss LGBTQ issues and topics that have largely been ignored in public debates and mainstream media.

“We look forward to hearing how the 2020 candidates plan to reverse the attacks and rollbacks of the Trump administration and put LGBTQ Americans on a course to 100 percent acceptance,” Ellis said in a statement.

As part of GLAAD’s announcement, the organization cited “more than 124 anti-LGBTQ attacks in policy and rhetoric from the Trump administration, including the president’s ban on transgender Americans from serving in the military and the administration’s opposition to the Equality Act.”

“This LGBTQ Presidential Forum is a pivotal moment in the 2020 election cycle,” said Ellis. “It’s the first time that LGBTQ issues will be exclusively discussed by 2020 presidential candidates on a national stage.”

On Monday, Sept. 16, Ross took to Twitter to express excitement for the upcoming forum, writing: “I’m so READY & excited to be hosting the #LGBTQ forum on Friday with @glaad @OneIowa, @TheAdvocateMag and @gazettedotcom to ensure that presidential candidates are talking about issues important to LGBTQ voters! Stay tuned!” 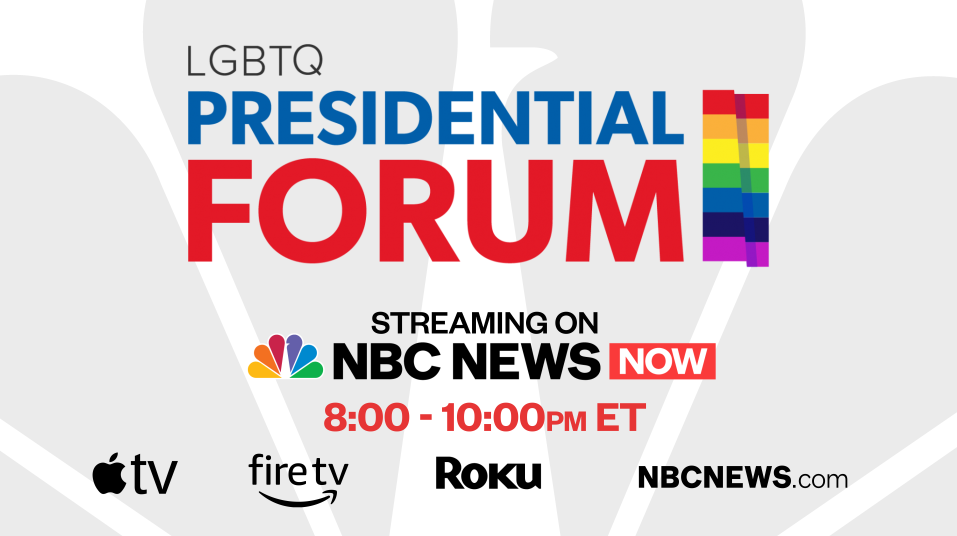 The forum will broadcast live from Coe College’s Sinclair Auditorium and will also stream in its entirety on GLAAD’s YouTube channel on Sept. 20 starting at 5 p.m. PST./8 p.m. EST. You can also tune in for free on NBC News NOW.