Vazquez, 28, reportedly had a sexual relationship with a 13-year old female victim, according to police in Florida. 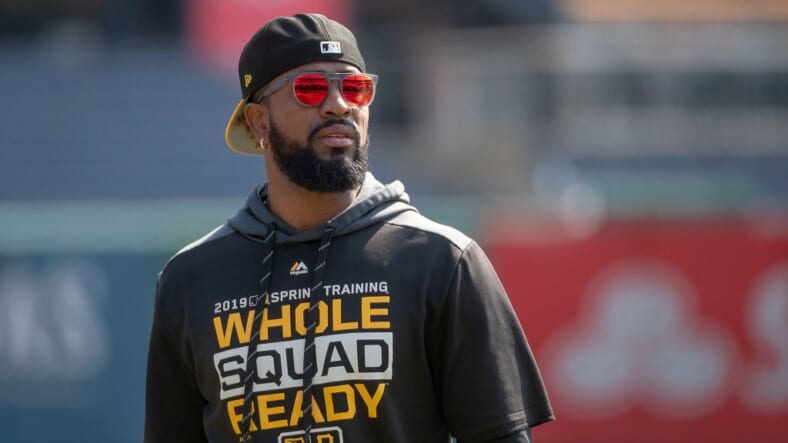 Felipe Vazquez #73 of the Pittsburgh Pirates walks off the field during batting practice before the game against the Cincinnati Reds at PNC Park on April 6, 2019 in Pittsburgh, Pennsylvania. (Photo by Justin Berl/Getty Images)

Felipe Vazquez, the All-Star Pittsburgh Pirates pitcher, was arrested on charges of  sexually soliciting a minor.

Vazquez reportedly exchanged sexually explicit content with an underaged girl, starting when she was 13, authorities said.”

The 28-year-old was charged with solicitation of a child, providing obscene material to minors and possession of computer pornography, according to a statement by the Florida Department of Law Enforcement. He appeared briefly in court and was denied bail and taken to the Allegheny County Jail, NBC News reports.

“After agents obtained information that Vazquez had a reported sexual relationship with a 13-year old female victim who resides in Lee County,” he was arrested. The investigation began in August,  according the Florida Department of Law Enforcement statement.

“The victim, now 15 years of age, was continuing to have a relationship with Vazquez via text messaging and received a video in July from him in which he is shown performing a sex act,” the Florida state police said.

“Additionally, Vazquez allegedly sent the victim text messages suggesting they would meet for sex after his baseball season was over.”

“Although the photographs and video did not depict the suspect’s face, the images depicted numerous tattoos about the suspect’s body” and they match “publicly available images of the suspect,” according to the affidavit signed by Florida Department of Law Enforcement Special Agent Orlando Esquibel and Lee County Judge Tara Paluck.

The victim said Vasquez drover to her home and “pulled her pants down while they were inside his car, placed the victim on top of his lap” and attempted to have sexual intercourse with her, according to the deputy report.

Vasquez additionally had statutory sexual assault, indecent assault of a person less than 16 years of age, corruption of minors and unlawful contact with a minor charges filed last year in Westmoreland County in Pennsylvania, according to court records.

Pirates President Frank Coonelly in a statement Tuesday said they are taking”this matter, and these charges in particular, extremely seriously.”