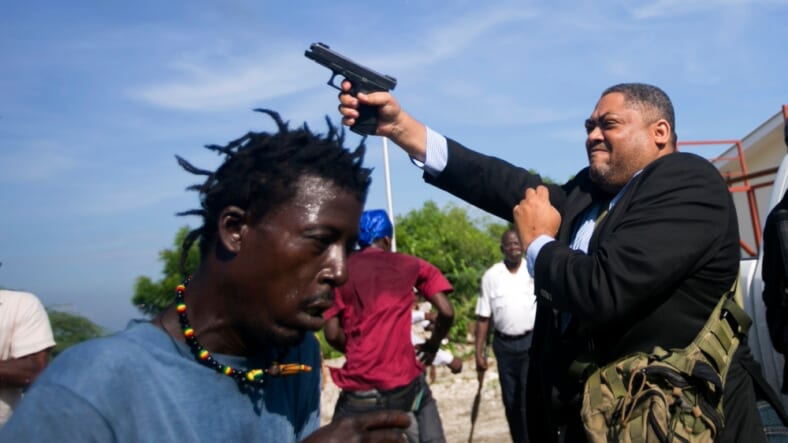 Ruling party Senator Ralph Fethiere fires his gun outside Parliament as he arrives for a ceremony to ratify Fritz William Michel's nomination as prime minister in Port-au-Prince, Haiti, Monday, Sept. 23, 2019. Opposition members confronted ruling-party senators, and Fethiere pulled a pistol when protesters rushed at him and members of his entourage. (AP Photo/Dieu Nalio Chery)

A Haitian senator reportedly went rogue and opened fire on a crowd outside Parliament where an election was taking place to confirm a new prime minister.

In the melee, a respected Associated Press photographer and a security guard were both shot, according to The Guardian.

It was reported that the photog suffered from bullet fragments getting embedded in his face, but the extent of the injuries was unclear.

Sen. Jean Marie Ralph Féthière, was pictured flashing a gun and reports have named him as the gunman who threatened to use the weapon if he was not allowed to proceed through the crowd.

Féthière, however, said he used his gun in self-defense. He stopped short of admitting to the shooting of the two men.

The new Haitian prime minister, Fritz-William Michel was in the midst of his second confirmation meeting.

Haiti has been embroiled in deadly protests since February 7.

Protestors are calling for its President Jovenel Moise and the prime minister to resign.

Earlier this year, the State Department has also cautioned for all “non-emergency US personnel and their families” to leave Haiti. The country reportedly has “limited ability to provide emergency services to US citizens in Haiti.”

—Meghan Markle connects with teen girls in South Africa: ‘I a woman of color and your sister’—