Meghan Markle connects with teen girls in South Africa: ‘I am a woman of color and your sister’ 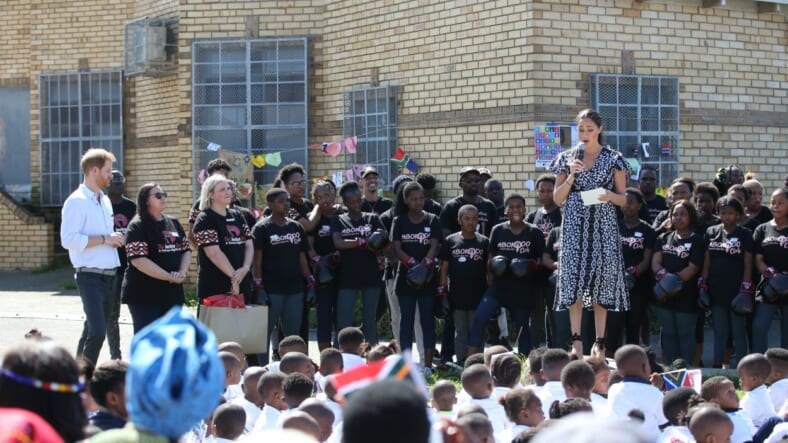 Meghan, Duchess of Sussex speaks during a visit to The Justice Desk on September 30, 2019 in Cape Town, South Africa. The Justice Desk initiative teaches children about their rights and provides self-defence classes and female empowerment training to young girls in the community. (Photo by Ian Vogler – Pool/Getty Images)

This week while visiting a township known as ‘South Africa’s murder capital’ British royal Meghan Markle gave a rousing speech to a group of teenage girls, in which she warmly assures them that she is there as a a woman of color and their sister.

According to The Daily Mail, on Monday the Duchess of Sussex and her husband Prince Harry began their highly anticipated royal tour of Africa. They kicked off the trip by visiting Nyanga, a township just outside of Cape Town, which is known as South Africa’s murder capital and where on average, 206 people are killed every year.

Given Nyanga’s dangerous reputation, details of the couple’s visit were kept secret until the last possible minute and there was a heavy security presence during their stay. Their son, four-month-old Archie, was also left behind at their residence with his nanny.

“May I just say that while I am here with my husband as a member of The Royal Family, I want you to know that for me I am here with you as a mother, as a wife, as a woman, as a woman of color and as your sister,” Markle announced while standing on a tree stump to address the audience of local women and girls being supported by local community charity Justice Desk.

While this isn’t Markle’s first time addressing her lineage or what it means to be in the public eye as a Black woman, it is her first time speaking about race publicly since officially becoming a royal.

Prince Harry, who was also in attendance is known for his love of dance and has often been photographed dancing during trips to the continent. This appearance was no different, and both he and Markle were spotted busting a move and laughing with locals on the first stop of their 10-day tour.

‘I’m here as a mothers, as a wife, as a woman of colour and as your sister’. Megan Markle speaks to teenage girls in South Africa’s ‘murder capital’ township. Here, 1 in 206 people die each year, a poignant place to choose as their first stop but sets the tone of this trip.