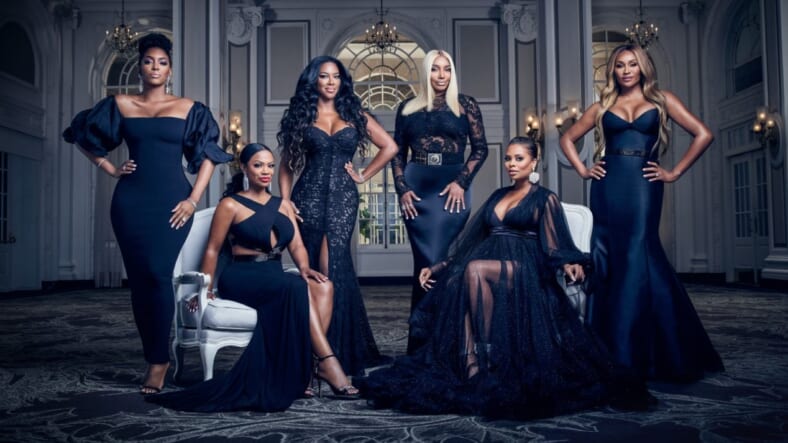 The ladies of the Real Housewives of Atlanta are back and judging by the looks of the first official season 12 trailer, there will be no shortage of serious drama.

Kenya Moore will return to the series this year and she and fellow new mom Porsha Williams seem to be on good terms. That’s about where the lovefest ends because a few seconds into the clip, we see a fist fight break out between several of the ladies.

“I told you that lady was crazy,” say a very pregnant Eva Marcille before we hear Porsha’s vice telling someone to “get out of this room.”

Later, we hear Nene Leakes screaming “No, no, no, no, no,” and all hell has clearly broken loose in the A.

It looks like viewers will get too see the moment that Cynthia Bailey gets her proposal from Mike Hill and we’ll watch Dennis McKinley having second thoughts about walking away from his engagement to Porsha.

Nene Leakes and her husband are back together, but in one scene, she seems pretty curious about the idea of an open marriage.

Expect to see sparks fly between Nene and Cynthia when a leaked recording surfaces.

“Cynthia has a side to her that you guys do not know about,” Leakes tells Marlo Hampton in one part of the clip. We’ll also get to see the trouble brewing between Kenya and her estranged husband, Marc Daly.

“We’re in a really low place right now,” Kenya tells Cynthia about her marriage before a scene flashes with Marc Daly yelling at Kenya.

“You can take everything, I’ll build it again!” he shouts.

Real Housewives of Atlanta returns to Bravo on November 3.