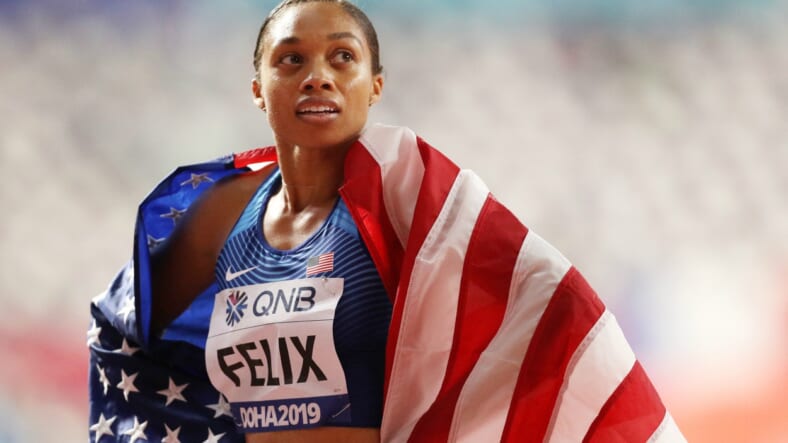 She joined in the first mixed-gender 4×400-meter relay at the IAAF World Athletics Championships in Doha, Qatar along with Americans Michael Cherry, Wil London III and Courtney Okolo for a finish of just over 3.9 seconds. Felix ran a 50.4-second split, or time she completed her leg of the relay.

The nine-time Olympic gold medalist surprised her fans late last year when she gave birth to her baby girl Camryn last November, but she suffered medical complications that sent her into labor eight weeks early.

“So special, to have my daughter here watching means the world to me,” Felix told NBC Sports. “It’s been a crazy year for me.”

Felix became the first athlete since Florence Griffith-Joyner in 1988 to win three gold medals in a single Olympic Games.  But she feared that having a child would somehow sideline her career and she struggled with trying to “live up to my pristine nice girl image”.

“Having a child felt like I’d be risking my career and disappointing everyone who expected me to always put running first,” she said previously.

She returned to running over the summer with an outspoken message about women’s rights in sports, particularly after she left Nike as a spokesperson when the athletic gear company gave her a 70 percent cut in pay after her pregnancy.

However, she fought against companies punishing women athletes for lesser performances after being pregnant.

“If we have children, we risk pay cuts from our sponsors during pregnancy and afterward. It’s one example of a sports industry where the rules are still mostly made for and by men,” she wrote in a New York Times op-ed earlier this year. She has since signed a contract with women’s sports gear maker Athleta.