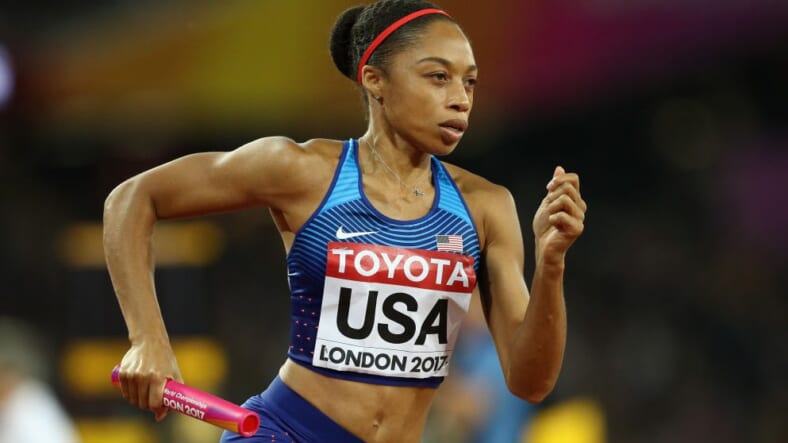 Decorated Olympian Allyson Felix surprised her fans when she gave birth last month before she even announced she was pregnant. Felix suffered medical complications that sent her into labor eight weeks early. She delivered her baby girl Camryn through C-section and all is well for mom and baby, Us Track and Field said Thursday, the Independent reports.

Felix, who became the first athlete since Florence Griffith-Joyner in 1988 to win three gold medals in a single Olympic Games, is navigating the difficulties of being a new mom with an infant in the NICU while trying to keep her career goals in sight and her own heath in check.

READ MORE: COMEBACK KING: Is Katt Williams is joining the cast of ‘black-ish’?

“I’m trying to be open to what God has in store for me and my family,””Felix wrote in a message posted to the team’s website.

“I still feel nervous and vulnerable. But I also feel brave and excited. Every day I sit with my daughter in the NICU and watch her fight. Every day she gets stronger and more beautiful.”

It’s a delicate balance that many high-profile athletes like Serena Williams have had to endured. Williams has been very candid about her pregnancy complications and postpartum struggles that have affected her life and her tennis game.

Felix feared that having a child would somehow sideline her career and she struggled with trying to “live up to my pristine nice girl image”.

“Having a child felt like I’d be risking my career and disappointing everyone who expected me to always put running first,” she said.

The Los Angeles native had not made mention that she was pregnant ahead of the early birth, delivering her daughter at 32 weeks on Nov. 28. She said she competed while pregnant and was inspired by Williams who kept her pregnancy quiet during the early stages while she competed.

Now the birth of her daughter has given her a newfound mission to keep fighting. She plans to compete at the Tokyo Olympics in 2020.

“I’m not just running to win the most medals anymore,” she said in a first-person article published by ESPN on Thursday.

“If I come back and I’m just not the same, if I can’t make a fifth Olympic team, I’m gonna know that I fought, that I was determined, and that I gave it my absolute all.

“And if it doesn’t end up the way I imagined in my head, it’ll be OK. I just have to go for it, because that’s just simply who we are now.”