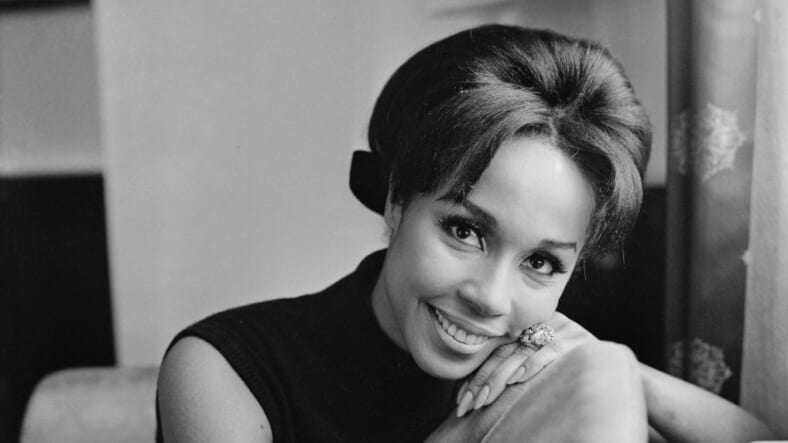 Friday, news broke that trailblazing actress and singer Diahann Carroll has died at 84.  But rather than mourn her passing, we’ve decided it would be more in line with who she was to celebrate her amazingly impactful life.

For the youngins reading this, be clear, some of your faves were inspired by this woman, whether you (or they) realize it or not. So below we’ve created a list of just five of the ways Carroll changed the game, for all of us.

Let’s put some respect on her name.

She was the 1st Black woman TV series lead

When you Google Diahann Carroll the main thing that pops up is that she was the first Black actress to lead a primetime series (in a non servant role), and there’s a reason for that.

What she did for Black women in entertainment is very decidedly the sort of thing legacies should be made of. And before there was a Claire Huxtable, an Aunt Viv or even an Olivia Pope, there was Julia Baker.

When Julia, a comedy about a Black nurse whose husband had been killed in Vietnam, hit the small screen in September of 1968 it was an instant hit and even won Carroll a 1968 Best Actress/TV Golden Globe Award.

Up until that point women of color were literally only seen as maids and Carroll forced viewing audiences to acknowledge what the Black community had known for generations: we’re really good at being in positions of power.

When you look at Hollywood powerhouses like Viola Davis and Kerry Washington there’s no question they stand on her shoulders.

These days we love seeing sisters like Rihanna and Beyonce forcing the industry to re-examine what rooms Black women are allowed to enter. Carroll was definitely cut from that very similar cloth. Her talent and grace were so undeniable, that on more than one occasion she went out for, and won roles meant for white counterparts.

According to the Associated Press, “She appeared often in plays previously considered exclusive territory for white actresses: “Same Time, Next Year,” ″Agnes of God” and “Sunset Boulevard” (as faded star Norma Desmond, the role played by Gloria Swanson in the 1950 film).

Carroll also crossed racial barriers when it came to partnering up with leading men, and won a Tony for the 1959 Richard Rodgers musical “No Strings,” in which she plays an American high-fashion model in Paris, who gets pulled into a love affair with a white American author.

Six decades later and Black actresses are still fighting for the kind of opportunities she worked so hard to set a precedent for.

She is the originator of “Bad & Bougie”

Now we would be remiss if we didn’t mention that it factor that Carroll possessed which was most gloriously displayed when she snagged a groundbreaking role as Dominique Deveraux, who debuted in the 1984 season of popular night time soap Dynasty.

Dynasty was epic and set stage for salacious primetime offerings like Empire. But because this was the 80s it was also shamelessly glamorous. The show was arguably one of the best executed television “guilty pleasures” of its day, and Carroll didn’t shy away from the opportunity to have fun with that dynamic.

So again.. when you see Megan Thee Stallion and her counterparts out here having Hot Girl Summers while studying for exams, please remember who first showed us it was possible to be all the things at once.

Get into this iconic Dominique Deveraux shady moment below.

She loved hard, often and without apology

Please be clear that in the midst of all this creative excellence and all around fabulousness, Carroll still found time to play as hard as she worked. As much as Black Twitter loves to applaud Lori Harvey for the way she leverages her free agency when dealing with powerful men… back in the day Auntie Diahann was just as much of a boss in her personal life too!

The woman behind the myth was married four times, (most recently from 1987 to 1996 to singer Vic Damone), and in her hey day made lines with quite a few high profile romances, most notably with fellow acting legend Sidney Poitier.

During a 2013 episode of Oprah’s MasterClass, she even opened up and shared with us the valuable lessons she learned from love and loss. If you haven’t seen it, do yourself a favor and track down the full episode. It beautifully illustrates the grace, self reflection and candor we all loved her for.

Her range and work ethic spoke for themselves

They say it’s best to get your flowers while you’re around to receive them and fortunately Carroll was constantly celebrated throughout her career.

She was nominated for four primetime Emmy nominations and as mentioned before won one for Julia. She was also nominated for an Oscar thanks to her performance in the titular role in the 1974 feature film Claudine, and given she was a jack of all trades who acted on stage as well as on the small and big screens she even won a Tony, a Golden Globe, and awards from the NAACP. In 2011 she was also finally inducted into the Television Hall of Fame.

“The responsibility of that box sitting in our homes is not something that any of us can walk away from,” Carroll once explained to the Television Academy. “For the young person that is sitting there, we’re helping to put their thought processes together about many areas of their lives. If we don’t accept that responsibility, it’s not good.”

Carroll was keenly aware of what her work represented for the rest of us and as a result became a blueprint for other actresses on how important it was to have range and always stretch yourself. While some divas took no issue with resting on their laurels, she made it a point to constantly reinvent and reintroduce herself to new generations.

In fact, some of us who weren’t around for her earlier career still remember her fondly from more recent roles in The Five Heartbeats, A Different World, and Grey’s Anatomy.

“Diahann Carroll walked this earth for 84 years and broke ground with every footstep,” wrote filmmaker Ava DuVernay. “An icon. One of the all-time greats. She blazed trails through dense forests and elegantly left diamonds along the path for the rest of us to follow. Extraordinary life. Thank you, Ms. Carroll.”

Diahann Carroll walked this earth for 84 years and broke ground with every footstep. An icon. One of the all-time greats. She blazed trails through dense forests and elegantly left diamonds along the path for the rest of us to follow. Extraordinary life. Thank you, Ms. Carroll. pic.twitter.com/YXjh7d3LWU