In only five years, the pint-sized phenom surpassed the previous record by Vitaly Scherbo, who earned 23 medals over six years. 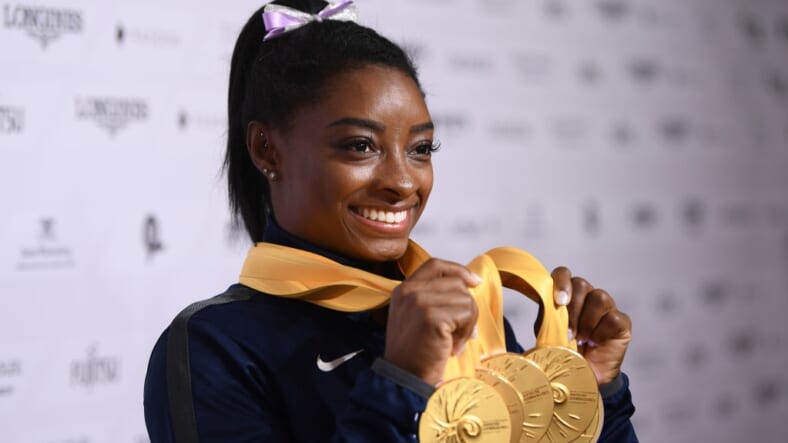 Biles earned a record-breaking 24th and 25th medals at the World Gymnastics Championship in Stuttgart, Germany, over the weekend, USA Today reports. She has surpassed the previous record by Vitaly Scherbo, who earned 23 medals over the course of six years in the 1990s. Biles has done it in just five. She tied Scherbo on Saturday by winning gold on vault. She earned her 24th medal on the balance beam Sunday morning.

TheGrio previously reported, last Saturday, Biles served up two new skills that had never been performed in competition; the triple-double during her floor routine and the double-double dismount on the balance beam,  which became a signature move bearing her name Biles II, CNN reports. The 22-year-old now has a total of four signature moves.

“If I were to label myself as a superstar, it would bring more expectations on me and I would feel pressured, more in the limelight, rather than now,” Biles said at a press conference before her performance last weekend at the 2019 FIG Artistic Gymnastics World Gymnastics Championship.

“I just go out there and compete,” she added. “I try to represent Simone… not ‘Simone Biles’ whenever I go out there, because at the end of the day, I’m still a human being before I’m ‘Simone Biles, the superstar.’”

On Tuesday, the gymnast won her 21st medal, leading team USA to their fifth consecutive world team championship. On Thursday, Biles bagged her fifth all-around world title when she beat China’s Tang Xijing by a 2.1 points.

“Every year it feels better and better just because we’re adding to the legacy,” Biles told reporters at the event. “I feel like I never think of records. I just go out there and do what I came to do, which is compete for the country.”