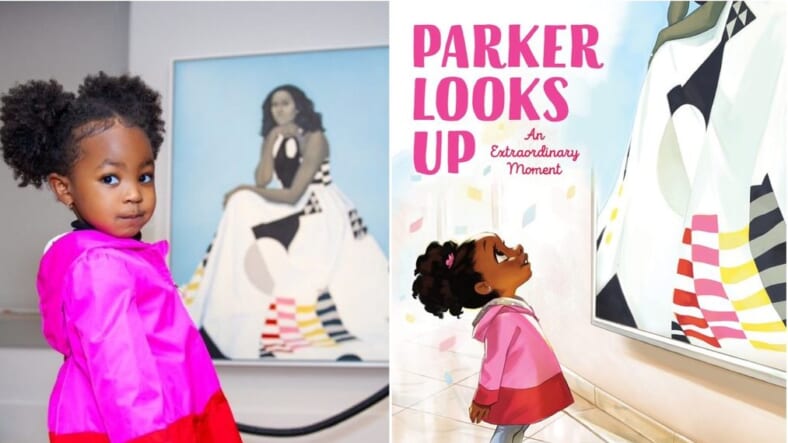 The adorable three-year-old child who melted hearts in 2018 when a photograph of her looking up at the official portrait of former FLOTUS Michelle Obama went viral, is now promoting her new children’s book.

According to NBC News, Parker Curry and her mom hope the release of Parker Looks Up will inspire other children to see endless possibilities.

“We specifically were coming to see the portraits of Barack Obama and Michelle Obama. She walked past the portrait. And then she stopped and she was frozen,” recalled mom, Jessica Curry.

That now-infamous moment of the then-three-year-old being awestruck by the beauty and grace of the former First Lady was captured by a stranger and lit up social media in a matter of just a few hours.

“I feel like the reason she was so awestruck is that she was like she’s this beautiful woman of color and she looks so regal and magical,” her mother explains.

Michelle Obama heard about the photo in record time and shortly thereafter, they met. Obama then shared a video of her own of the two of them having a “dance party.”

READ MORE: Gabrielle Union defends her family with a classy clapback on Twitter

The lovefest between the child and her idol continued later that year when Parker decided to take it a step further and dress as the first lady for Halloween. In response, Obama tweeted, “You nailed the look, Parker! I love it!!”

At a book tour event for Michelle Obama’s wildly successful memoir Becoming, they were reunited once more and Parker shared a photo of them on Instagram.

“So excited to finally be able to share our book “Parker Looks Up” with all of you!” Curry’s mother wrote in an Instagram post. “This book means so much to us and we hope that it inspires Parker’s generation and generations to come.”

Parker Looks Up is now available on all platforms.

So excited to finally be able to share our book “Parker Looks Up” with all of you! This book means so much to us and we hope that it inspires Parker’s generation and generations to come. . . Thank you to @simonkids & @foundrymedia for making this possible, to @essence & @joimariewrites for revealing the cover and last but certainly not least to @MichelleObama, @asherald, and @smithsoniannpg for your endless inspiration. . . Available for pre-order now! Link in bio. #parkerlooksup #simonkids #simonandschuster #michelleobama #amysherald #mynpg #smithsoniannationalportraitgallery #parkercurry