5 Reasons HBO’s new ‘Watchmen’ series with Regina King is a MUST SEE! 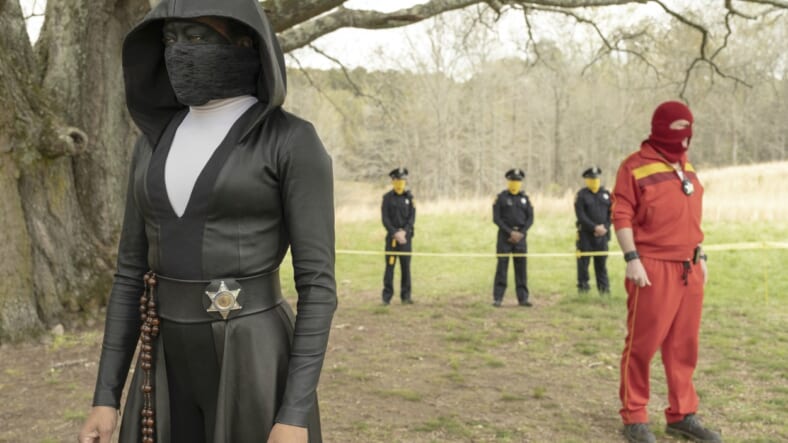 Regina King in a scene from “Watchmen,” premiering on Oct. 20. (Mark Hill/HBO via AP)

Sunday evening the new HBO series Watchmen, which stars Regina King premiered and within mere minutes Twitter was whipped into a frenzy about the pilot of Damon Lindelof’s revamped take on Alan Moore and Dave Gibbons’ source material.

In fact, The Atlantic calls the show, “a stunning, timely departure from its graphic-novel origins,” an assertion that everyone seems to be in agreement with after viewing the bold pilot that even those of us who aren’t into graphic novels had a hard time turning away from.

If you somehow missed the first offering of what is easily one of the top five new shows of 2019, no worries. Below is a list of five reasons you need to set your dvr’s asap-edly and get on board with the rest of us.

This first reason to check out Watchmen almost goes without saying. To paraphrase a wise man on Twitter, “Regina BEEN King.”

Most of Black America knows that she is one of the best actresses of our time and has a resume that would make anyone in Hollywood sit up and take notice.

In this latest offering she plays the role of Angela Abar, a police officer turned vigilante who’s also known as Sister Night.

For some, that would sound like the sort of premise reserved specifically for proud geeks and lifelong comic book fans, but in this case the Oscar winner’s ability to humanize just about any character she sinks her teeth into grounds Watchmen in a way that makes you set aside all preconceptions or personal biases about super hero shows and actually take this one seriously. From the jump.

Also, it’s worth noting that in this remixed version of the 1980’s cult classic, Sister Night is a working mom, who makes unapologetic comments to her boss about having to look for a sitter, right before running off to fight the bad guys.

Her role as a mother isn’t treated as a nuisance and instead seems to inform her personal motivations to make the world a better place for the rest of us.

We see sensational headlines touting violent attacks as “the worst massacre” in America more often than we should. While these claims are often used as clickbait, in reality the deadliest racially motivated massacre in U.S. history actually took place nearly a century ago.

On May 31, 1921 the imprisonment of Dick Rowland, a Black man falsely accused of assaulting a white woman, sparked a race riot that ultimately ended up in the destruction of a thriving African American community in Tulsa, Oklahoma.

The Smithsonian NMAAHC reports, “From May 31st to June 1st, white mobs ransacked, razed and burned over 1K properties, and murdered scores of African Americans in Tulsa.”

Although Oklahoma lawyer B.C. Franklin kept a firsthand detailed account of the massacre that destroyed that prominent Black Greenwood community, the incident only received scant coverage in the history books.

READ MORE: Olivia Hooker, one of the last survivors of the 1921 Tulsa Race Riots and retired Fordham University professor dies at 103

But thanks to the opening sequence of Watchmen, which poignantly dramatizes the carnage that took place over those two days, on Sunday evening the Tulsa Massacre began trending on Twitter, with people of all races curious to learn about this virtually forgotten chapter.

“I can’t believe #WatchmenHBO is actually talking about the Tulsa Race Massacre,” wrote one excited viewer in a now viral tweet.

“WOW I can’t believe that my family history is on TV… My whole family is shocked but joyed that everyone talking about it nowadays. It had been long forgotten by the rest of the world.”

It acknowledges white supremacy as terrorism

Time and time again statistics have shown that domestic terrorism, particularly the systemic kind enacted by emboldened white supremacists, is easily one of the biggest threats to this nation’s safety. In fact it’s an even bigger threat than the Islamic State.

However, when it comes to discussing white supremacy people still have a hard time saying the T word, let alone admitting the true depth and scope of the damage it’s done in the lives of Americans for centuries.

But in the world of Watchmen, the characters don’t seem to have any of those misgivings on what white supremacy is, and it is handled, addressed and at certain points flat out called, “terrorism.”

As a Black person in this country it took me aback how deeply affirming that subtle but substantial choice of words was. There is something powerful about very simply calling a thing what it is without pretense.

It shows what law enforcement could be

Usually when we watch programming having to do with racial tensions, the Ku Klux Klan, or any other subject of that kind, white supremacists are the ones wearing the masks so that they are empowered to walk the streets with anonymity. But in this series it is actually law enforcement that is afforded that luxury.

While in our world police officers are often enabled to walk the streets while openly reveling in the power of their authority, in this show cops don’t get to peacock. Instead they work in anonymity and only focus on protecting the citizens under their watch, with no personal glory attached.

Police who make policing their number one priority over personal gain. What a cool concept eh?

To be fair, we’ve only watched the pilot, so let’s see if this idealistic version of law enforcement is maintained or just a set-up for a juicy plot twist about corruption later on.

The writing is amazing

Superhero shows and movies may be all the rage these days, but if we’re painfully honest, sometimes these trendy offerings sacrifice substance for style. Fortunately, Watchmen is not one of those cases.

In fact, aside from the stellar acting by King and her counterparts, the show relies heavily on gorgeous (albeit moody) cinematography and a really intelligent script full of quotables that are sure to work their way into our daily vernacular.

Easily, the breakout sound bite of the premiere, which also does an excellent job of summing up both the show and King’s character is:

“I got a nose for white supremacy…. and he smells like bleach.”

We can already imagine that one on a t-shirt! And if you got to the bottom of this list and still haven’t decided to check out the first episode of Watchmen, now is as good a time as any to reconcile that.