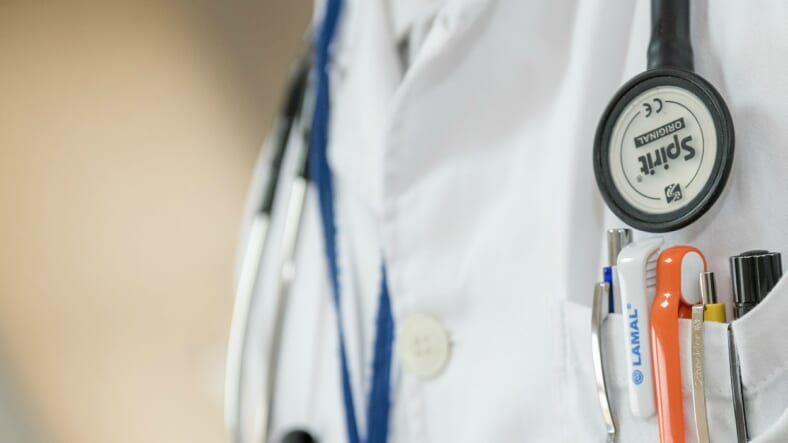 A stock photo of a doctor. (Pixaby)

Just in time for the upcoming holiday season, a group of Chicago area churches have banded together to buy and then forgive the medical debt of 5,888 families in need.

According to the Chicago Tribune, the churches which serve the Cook County community, led by organizers, the Rev. Otis Moss III and the Rev. Traci Blackmon, have banded together to outsmart a debt collection system that profits “on the backs of poor people.”

This fall thousands of families will receive bright yellow envelopes in their mailboxes with the words “RIP Medical Debt” on each one. Moss says those letters are the aftermath of the more than $5.3 million in medical debt that she and her group have wiped out, and will soon be sent out along with the message: “May you have a beautiful, wonderful holiday. Your debt has been forgiven. Enjoy Thanksgiving.”

“People don’t know that they’re going to receive this,” explained Moss. “And it’s my imagination that there will be 5,888 families in Cook County that will be shouting and thanking God that their debt has been forgiven.”

Rev. Blackmon, who is a leader in the United Church of Christ, of which Moss’ Trinity Church is part, says it was around this time last year when she first read about a nonprofit called RIP Medical Debt, which was founded by former debt collection agents. She was so inspired she reached out to Moss in hopes that they could partner with the organization to raise money specifically for areas in Cook County where many people live below the poverty line.

“We see Cook County as our parish,” Moss said. “And our job is to ensure that you, in some form or fashion, will experience the compassion, the love, the care and the generosity that flows from God’s heart. That’s what we’re called to do. So you will receive debt forgiveness whether you are Christian, Muslim, Jewish, humanist, secular, agnostic, atheist, whether you’re black or you’re white. The only criteria that we laid out is that we want to make sure the most vulnerable are in line. Or as Scripture says, ‘The last shall be first.’”

Working with the Leadership Network, a collective of Baptist churches located on the city’s West Side serving predominantly black neighborhoods, Blackmon and Moss were able to raise $38,000. Because debt can be purchased from creditors for pennies on the dollar, that amount was enough to purchase and then erase over $5.3 million in debt.

Blackmon says through RIP Medical Debt, the average debt for local families of $907 cost less than $2 to eliminate.