Eddie Murphy on playing Rudy Ray Moore in ‘Dolemite Is My Name’: “He wasn’t a genius” 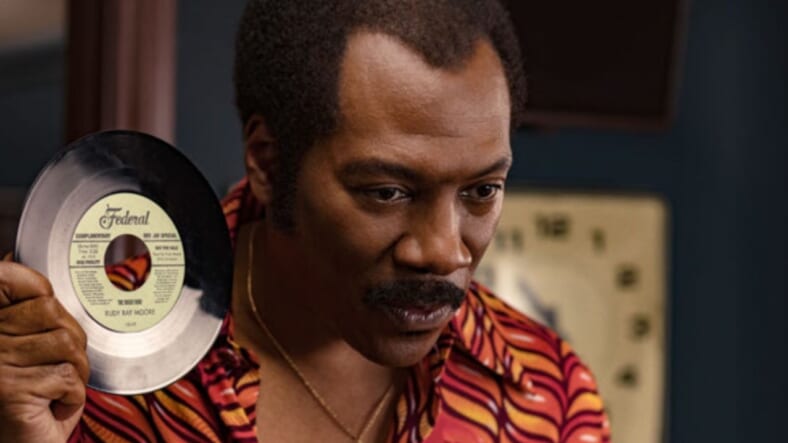 Eddie Murphy is back in a big way with Netflix’s Dolemite Is My Name. In it, he portrays legendary comedian Rudy Ray Moore and sheds new light on the man known for being more than a little crass.

Joined by a long list of A-list stars including Keegan-Michael Key, Wesley Snipes, Mike Epps, Da’Vine Joy Randolph, and Tituss Burgess among others, the film strikes the perfect balance of hilarity and heart.

Stung by a string of showbiz failures, floundering comedian Rudy Ray Moore (Murphy) has an epiphany that turns him into a word-of-mouth sensation: step onstage as someone else. Borrowing from the street mythology of 1970s Los Angeles, Moore assumes the persona of Dolemite, a pimp with a cane and an arsenal of obscene fables. However, his ambitions exceed selling bootleg records deemed too racy for mainstream radio stations to play. Moore convinces a social justice-minded dramatist  Key) to write his alter ego a film, incorporating kung fu, car chases, and Lady Reed (Randolph), an ex-backup singer who becomes his unexpected comedic foil. Despite clashing with his pretentious director, D’Urville Martin (Snipes), and countless production hurdles at their studio in the dilapidated Dunbar Hotel, Moore’s Dolemite becomes a runaway box office smash and a defining movie of the Blaxploitation era.

theGrio sat down with Eddie Murphy to discuss Moore’s legacy and learned why he’s such an important figure.

“I got exposed to Rudy Ray Moore just from his movies and his records. So you just kind of think that’s who the guy is. When I got older and I met him and I got in the business and I looked at him like– He’s an inspirational figure,” said Eddie Murphy. “The way he got his movies made… that’s amazing. And then the way he got his records made, to me, that’s amazing because he wasn’t a genius like Richard Pryor or these other guys. He was like super, super crude.”

According to Murphy, the thing that set Rudy Ray Moore apart from the rest was his perseverance.

“What he had; his gift was that he believed in himself. That’s the most important part, if you want to try to do something, is believing in yourself,” he continued.  “What’s that shit? If you could see it, You could be it? That’s real. It’s a real thing. And he exemplifies that.”

While plenty of folks remember laughing at Moore’s ridiculous antics as Dolemite, it wasn’t until much later that people recognized what it took to create those films the way he did at the time.

“You watch a Fellini movie, smoke a joint and watch a Fellini movie and it’s kind of like, ‘What the fu*k is this?’ Rudy’s movies were the same way… I just started thinking of him like, ‘Wow, this dude was like this guerilla, Avant-Garde filmmaker…This is a comic genius”

While it’s clear that Eddie Murphy now recognizes the genius of Moore’s work, he admits that he didn’t take it so seriously when he was a teenager.

“When I first watched ‘Dolomite’ I watched it because we thought it was funny. First and foremost, we thought it was funny…We loved all the microphones coming into the shot and, you know, him missing a punch by three inches and I’d be able to see all the little stuff that was wrong and that was part of the movie that was entertaining as well,” he explained. So back then, you know, I’m 15. I started doing standup when I’m 15. So at 14, I’m already aware of Richard Pryor and so from 14 I know what the best is. This isn’t the best, but it’s funny.”

Check out our full interview with Eddie Murphy above.

Dolemite Is My Name is streaming now on Netflix.