OPINION: The rapper who recently talked his way into trouble after talking about his daughter's hymen appeared contrite and actually asked the right questions during the Facebook show 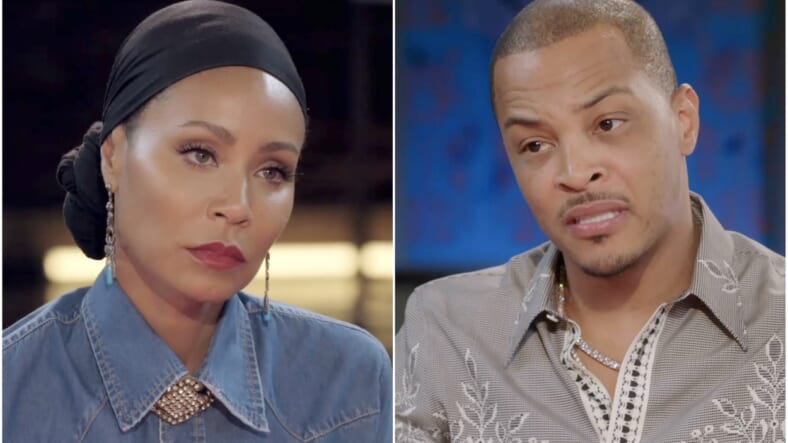 When I found out T.I. was going to be appearing on Red Table Talk to address “Hymen-gate,” like most of you I groaned and rolled my eyes in frustration. The assumption being that Jada Pinkett Smith and husband Will Smith’s personal relationship with the rapper would cause this to be a soft ball publicity stop where no one took any real accountability.

Fortunately, for the most part, that assumption was unfounded.

From the opening scene where Will joins his wife to greet T.I before the interview, and the actor gives the opinionated emcee the, “Good luck brother, but you’re on your own!” look then quickly leaves, it became clear that Tip was going to be challenged by all the women in attendance.

READ MORE: Why T.I. and fathers like him must stop policing their daughters’ and wives’ sexuality

Then, the producers went the extra mile of having #MeToo movement creator Tarana Burke and Georgetown University sociology professor, Dr. Michael Eric Dyson quickly speak to the audience in pre-taped segments, to give an educated framework on exactly WHY what Tip said he did was so potentially damaging and ill advised for other fathers.

After the experts cleared the air, the interview began with Pinkett Smith letting T.I, his wife Tiny and the audience know that even though she had no intention of disrespecting her friends on camera she was also not going to skate around the tough questions that we’ve all been waiting for this man to answer.

A joke that went too far?

Those who read my column regularly know that I constantly preach about how intent doesn’t negate impact. And this whole scandal is a perfect illustration of how just because a man has the best of intentions doesn’t mean he isn’t responsible for the adverse outcomes of those actions.

Of course we all know T.I loves his child and convinced himself that what he did was an act of love rather than a violation of her rights. But that still doesn’t negate the impact of him boasting about his overzealous ways in public.

“I came to clear up any misconceptions that have been surrounding how we interact and parent and what is appropriate and inappropriate,” Tip began, then describes how he was in a jovial mood during that now infamous podcast interview which caused him to crack jokes that may have been mistaken as facts.

“From a place of truth, I began to embellish and exaggerate and I think a lot of people took it extremely literal,” he added, admitting that at the time he didn’t understand the sensitivities surrounding the topic at hand.

He also clarified that the visits to the gynecologist were made when his daughter was 16 and that he had both her and her mother’s consent to join them during the visits but was never in the room during her actual exams.

“She did have a problem with me talking about it however, and I understand that, and I am incredibly apologetic to her for that,” he conceded. “She understands my intentions and she knows who I am, who I’ve always been.”

READ MORE: Jada Pinkett Smith talks tackling tough issues at Sundance: “You know how it feels to be invisible”

Rapper T.I. and His Wife Tiny Set The Record Straight

Rapper and actor T.I. comes to the Table with his wife Tiny to address the controversy around him taking his daughter to the gynecologist to ensure she’s still a virgin. Part 1 of a special 2-part Red Table Talk.

An apology of sorts

The rapper then said that despite being ‘incredibly apologetic’ to his daughter he had no remorse to gift his alleged haters who pointed out why he needed to be apologetic to her in the first place. Given that even the experts have now confirmed that those “haters” got it right this time, this stance was peculiar.

But that tends to be what happens in these cases isn’t it? When the public calls someone out for a blatant misstep, rather than concede the audience was smarter than they realized, many celebrated people tend to harbor resentment towards the most extreme naysayers in the crowd.

The nature of the ego is to focus on the loudest and most offensive voices even when everyone else is giving constructive feedback. And T.I’s semi-apologetic (but still visibly annoyed) demeanor when speaking of the public backlash hinted that his ego is still bruised from us catching him slipping so hard.

Were there some folks making outlandish comments? Of course. But the rest of us got it right.

READ MORE: At the end of the day, don’t we need more Black parents like Will and Jada?

This is where Pinkett-Smith’s mastery as a host comes in. Because she was clearly aware of that fact and did exactly what any objective moderator would have done. She reached over, looked him in the eye, told him she was on his side and rooting for him to get it right, then (lovingly) called him out whenever he unwittingly slipped back into his old rhetoric.

That’s what compassionate accountability looks like folks. And dare I say within minutes of that initial defensive stance, T.I went from being a controlling father to a curious man asking the women at the table to explain to him all the blind spots he’s had the luxury of ignoring up until now.

“I am here to protect all of the children from themselves until they make it to a point where they have awareness, a sense of self and discernment to be able to make certain decisions on their own that will impact their lives indefinitely,” he said when pushed to justify his hyper focus on his daughter’s hymen. “I’m not there to protect necessarily virginity, I just know that is a big move.”

“That’s different — that’s education,” Pinkett Smith chimed in, noting how his way of speaking on the topic was already evolving during their discussion.

“It was an exceptional show and I’m proud of it,” Pinkett Smith said of the show while  speaking to PEOPLE. And you know what sis, you should be. These are exactly the sort of discussions we need to have more of.

Part two of Red Table Talk where the ladies pivot from T.I’s role as a father to his problematic antics as a husband is set to air next week. And given how I’ve previously stated that men who are misogynistic towards their wives are prone to exhibit that similar behavior with their daughters, this segue is yet another stroke of genius.

After all these years Tip is finally having a reckoning about his outdated views on womanhood in all aspects of his life. And if he can quiet his ego down long enough to truly listen, an evolution is totally possible.

One can only hope that some of those same men who’ve jumped to his defense the last few weeks are still watching and are inspired to follow him down this new path as well.