Why T.I. and fathers like him must stop policing their daughters’ and wives’ sexuality

OPINION: T.I.'s perspective on his daughter keeping her virginity and his wife's genitalia belonging to him is problematic at best and dangerous at worst 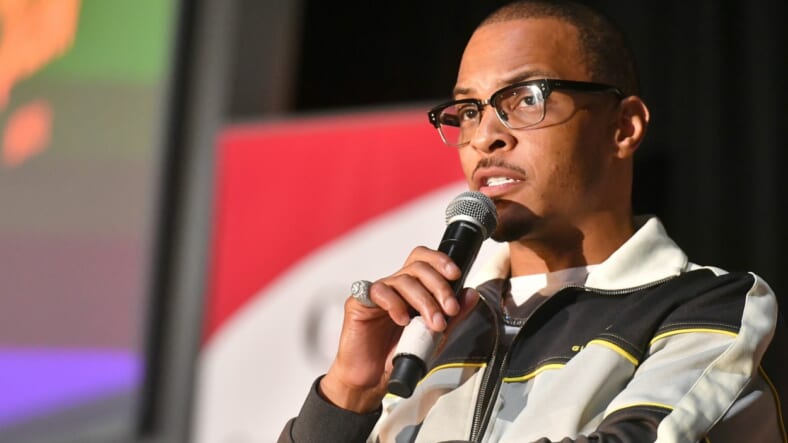 Despite his glaring faults as a husband, rapper Tip “T.I.” Harris has always sold himself as an emotionally invested father. But this week, we all learned that some of the problematic behavior he’s exhibited towards his on-again-off-again wife, also shows up in how he treats the other women in his family — specifically, his 18-year-old daughter, Deyjah.

Recently, while appearing on an episode of the Ladies Like Us podcast, the 39-year-old M.C. told hosts Nazanin Mandi and Nadia Moham, about how he goes about parenting his children.

“I think that most kids in hindsight, looking back, they always thank their parents for not allowing them to damage themselves as much as they could have,” he said, which led to the topic of having the sex talk with kids.

The conversation seemed pretty standard until Tip dropped the bombshell that when it comes to his daughter, he makes it a point to confirm she’s still a virgin.

“This is the thing. Deyjah’s 18, just graduated high school now and she’s attending her first year of college, figuring it out for herself,” he said. “And yes, not only have we had the conversation, we have yearly trips to the gynecologist to check her hymen.”

At first Mandi and Moham chuckled at the confession, probably out of nervousness and shock. But not seeming to pick up on the weight of his words, Tip went on to say he even goes with his daughter her to the doctor’s office to hear the results of her private pelvic exams for himself.

“So it’s this one time we go, I think this might have been after her 16th birthday,” he began before going into a mortifying anecdote.

“This is what we do. Right after the birthday we celebrate. Usually like the day after the party she’s enjoying her gifts. I put a sticky note on the door: ‘Gyno. Tomorrow. 9:30.’ So we’ll go and sit down and the doctor will come and talk and the doctor’s maintaining a high level of professionalism.

“He’s like, ‘You know sir, I have to, in order to share information’ — I’m like, ‘Deyjah they want you to sign this so we can share information. Is there anything you would not want me to know? See doc? No problem,’ ” Tip explained. “And so then they come and say, ‘Well I just want you to know that there are other ways besides sex that the hymen can be broken like bike riding, athletics, horseback riding and just other forms of athletic physical activity.’ So I say, ‘Look doc, she don’t ride no horses, she don’t ride no bike, she don’t play no sports. Just check the hymen please and give me back my results expeditiously.’ ”

Atlanta rapper T.I. is under fire after he says he goes to the gynecologist with his daughter every year to "check her hymen", to make sure it's "still intact."?? pic.twitter.com/Ttl1ZFhvSn

Misogyny by any other name is still…

There are so many things wrong with this story I almost don’t know where to begin.

First and foremost, if you are one of those people who thinks a woman’s virginity “belongs” to any man — be it her husband or father — this post probably isn’t for you. Because I am writing this under the premise that we’re all living in the same century, where reasonable people understand that a woman’s body is no one else’s property.

Then there’s the matter of medical rights and privacy. In his own words, T.I knows that legally he has no right to strong arm his — now adult aged — child to share her medical or sexual history with him. And rather than giving her the choice about what she feels comfortable sharing, he instead sits in the doctor’s office and verbally manipulates her into signing away her rights.

The fact that T.I. is constantly telling Republicans to stay in their lane on social issues, but doesn’t realize he’s being just as tyrannical about the reproductive health of the women in his own life, is astounding.

As if all of this wasn’t damaging enough, it’s also — quite ironically — teaching this poor young woman that in her father’s eyes her value is directly related to what is going on between her legs. In attempting to squash Deyjah Harris’ sexuality, T.I has actually made it even more of a focal point. And because a woman’s relationship to her father often heavily informs her romantic relationships as an adult… bruh, this is an emotional dumpster fire.

It’s gonna take a very, very good therapist years to unpack all the violations — be the emotional, physical or ethical — and habitual line-stepping that your boy Tip has subjected his daughter to in just the first 18 years of her life, all under the guise of strict parenting.

But let’s be honest, why are are we surprised?

Misogyny is misogyny is misogyny. And while we’d all like to think it’s possible for a man to be a dog to his wife but still do right by his daughter, the truth is, men who have deeply sexist views against the women they sleep with, more often than not repackage and redirect those some damaging ass ideologies towards their children.

Misogyny by any other name still reeks of fear and fragile masculinity.

What are you REALLY scared of?

Recently, T.I. and wife Tameka ‘Tiny’ Harris turned heads after the rapper told his wife — in front of the whole world — that half of her body belongs to him.

The declaration took place during a candid episode of his instantly popular ExpediTIously podcast, where listeners were promised a glimpse into the couple’s thoughts on sex, and what makes their marriage tick.

“So sex is important? (in marriage),” Tip asks Tiny, an inquiry that is prickly at best given their rocky marriage has been plagued with accusations of cheating for years.

“Yeah, sex is very important,” Tiny responds, noting that even in instances where the woman is the breadwinner, there’s still an expectation that she, “still may come home and cook for you. Give you sex and do everything.”

READ MORE: T.I. says half of his wife’s private parts belong to him

Apparently the term “give you sex” rubbed Tip the wrong way because in response he balked, “Give you sex? What do you mean? Give you sex? Man, that’s in the contract. Man.”

“Make sure you are pleased,” Tiny amended, attempting to smooth things over. But by then it was too late and we were all gonna have to listen to this man assert his dominance whether we wanted to or not.

“I don’t give you nothing. See, you can’t be rationing out stuff, talking about what you’re going to give nobody because what’s yours is mine and what’s mine is yours,” he explained. “That means that little thing you got, that little sex box you got is half mine. So you pick which side you want, and that’s yours. The rest of it is mine. We can split it right down the middle of the…What do they call it? The, the, the, is it the, ‘Uvula’?”

So let me get this straight, a brother who clearly read the entire dictionary while sitting in jail, yet still doesn’t know how to pronounce “vulva,” has somehow convinced himself that half of his wife’s genitals and the entirety of his daughter’s hymen are his property?

What fresh hell is this?! Seriously. A part of me is praying this is all a publicity stunt.

But if these disturbing ideas are indeed his true feelings, then I suspect T.I’s biggest fear for both Tiny and Deyjah is that one day one (or both) of them will run into another guy just like him. If you’ve been paying attention you’ll note that whenever he talks about running his household his fear that karma will rear its ugly head is always evident in his controlling antics. How’s that for irony?

This brother literally took a page out of Jordan Peele’s US and is his own personal boogeyman.

Unfortunately, his wife seems to be committed to staying with him no matter how many times he publicly embarrasses her — and as an adult I suppose that’s her right.

But as for his daughter, she can do better. She deserves better. And the next time she goes to the doctor’s office, I hope she remembers all this recent backlash and finally refuses to sign those damn papers.

Her hymen, is her business. Period.