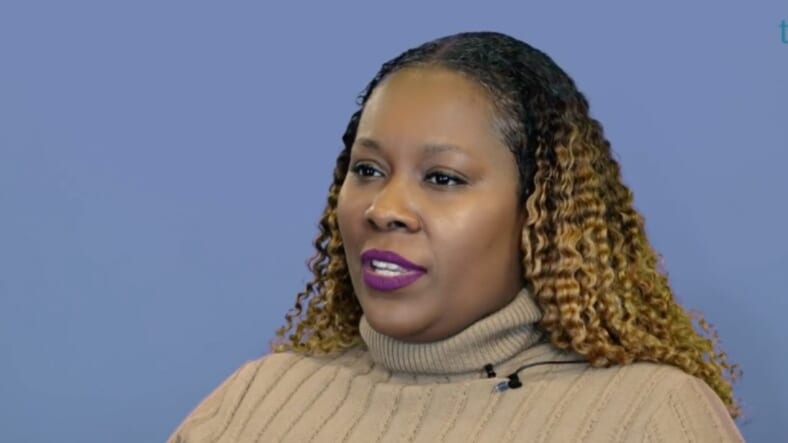 Criminal justice activist Topeka K. Sam was set up for success, raised in Long Island to a two parent home of business owners. “We had every single opportunity. I had the piano lessons, the dance lessons. My brothers play the violin and the cello.”

Wanting to escape her largely white neighborhood, and attend college with students who looked like her, Sam enrolled in Morgan State University, an HBCU in Baltimore, MD. “I ended up going off campus and going into the streets of Baltimore and just being exposed to things that I never had been exposed to, which was a fast lifestyle of being around guys who were engaged in selling drugs. And I just felt I could do the same thing.”

READ MORE: Van Jones on being called a ‘sellout’: ‘I’m more worried about outcomes than outrage’

In 2012, when she was charged with drug conspiracy in Virginia, Sam hoped to receive bail, but instead, the judge labeled her a “drug queenpin” and she served 3 years in prison.

In prison, Sam saw women forced to give birth in shackles, make due with rationed feminine hygiene products, and struggle to see their children. “Before I went to prison, I thought that people who were in prison were there because they did something wrong,” Sam admits. However, her world view changed completely after meeting her fellow inmates. “[I] asked one sister and she said that she began to use heroin because her father was raping her and gave her the heroin and said the pain would go away. And that’s how she became addicted to drugs.”

According to prisonpolicy.org, the number of women entering prison has increased by 834% since 1978. Most of these women enter prison with a history of abuse, trauma, and mental health issues. In fact, a study by Northwestern University in 2005 showed that 98% of incarcerated women had been exposed to trauma during their lifetime. The harrowing testimonies of Sam’s inmates combined with the fact that the rate of women entering prison is steadily climbing sparked Sam’s lasting passion for prison reform.

After her release in 2015, she started the Ladies of Hope Ministries, an organization that helps formerly incarcerated marginalized women transition back into society through education, entrepreneurship, spiritual empowerment, and advocacy (thelohm.org). “I fight for women specifically because we are not heard. I fight because people look at us and think that there’s a certain look or a certain face that goes to a woman in prison.”

Topeka Sam’s devotion to activism caught the attention of #cut50, the criminal justice organization co-founded by CNN’s Van Jones. Sam partnered with the organization for their Dignity for Incarcerated Women campaign, which is led by multiple formerly incarcerated women and has worked to change policies concerning women in 10 states.

“What I’m hopeful about is that we will, as women of color, understand that we only have each other,” Sam tells TheGrio. “If we come together with our resources, not even money, but just our brilliance, our courage, our resilience and compassion, and really come together to build a new community for ourselves and our families, I think that we can then control the narrative.”

Watch the entire interview below:

To support Ladies of Hope Ministries visit their website, thelohm.org or text the letters LOHM to the number 71777 to donate.