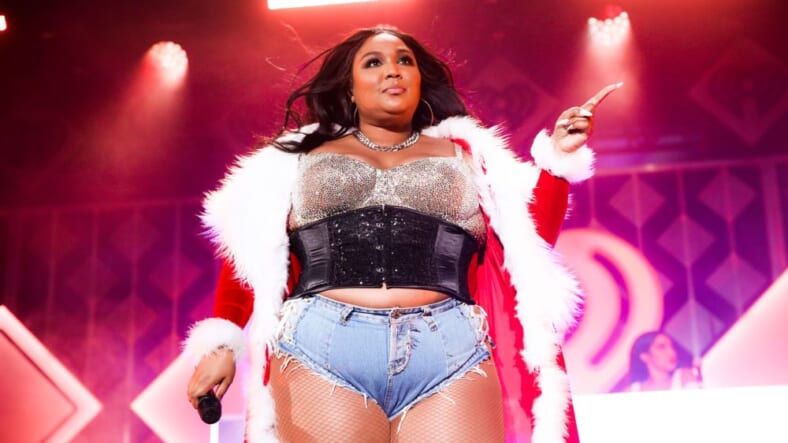 Lizzo nervously interrupted the presidential candidate by making sure that he did not state the original lyrics to the song, but showed signs of relief when he took another route. (Photo by Rich Fury/Getty Images for iHeartMedia)

Multi-talented artist, Lizzo found herself not looking so “good as hell” in a photo with presidential candidate, Pete Buttigieg during their appearance on CBS This Morning show on Thursday.

The Time’s “Entertainer of the Year” posed in a photo with the Indiana mayor barely “cracking a smile,” Mashable reports, leading to some speculation about whether the interaction was uncomfortable.

When host, Gayle King asked him to describe himself in three words, Buttigieg responded, “Standing near Lizzo, right now.”

Lizzo then followed up with her response to the question by saying “Glamorous, talented, and booty-ful.”

Referencing one of Lizzo’s popular songs “Truth Hurts” King then asked Buttigieg if he recently took a DNA test and he responded, “Yes, and I am 100 percent that nominee …”

Buttigieg posted of the two at the morning show, with the caption, “Feeling good after chatting with @lizzobeeating on set at @cbsthismorning!”

Feeling good after chatting with @lizzobeeating on set at @cbsthismorning!

But based on the picture it where Lizzo stares blankly ahead, social media users interpreted that Lizzo wasn’t feeling the same way.

Other Twitter users interpreted their own take of the photo as well. Writer Ira Madison captioned the picture, “Green Book (2018)” in reference to the controversy behind the film winning Best Picture last year. While another user pointed out the awkward placement of the Toyota sign in the background.
Although the internet came to conclusions, it looks like there was more to the story.
Buttigieg’s team shared some behind-the-scenes footage of the mayor and Lizzo having a perfectly friendly conversation while on CBS Morning’s set.
It looks like the interaction between the presidential candidate and the entertainer was all “good” after all.

Editor’s note: This story was updated Thursday, Dec. 19 to reflect the Buttigieg campaign’s behind-the-scenes footage of the interaction.