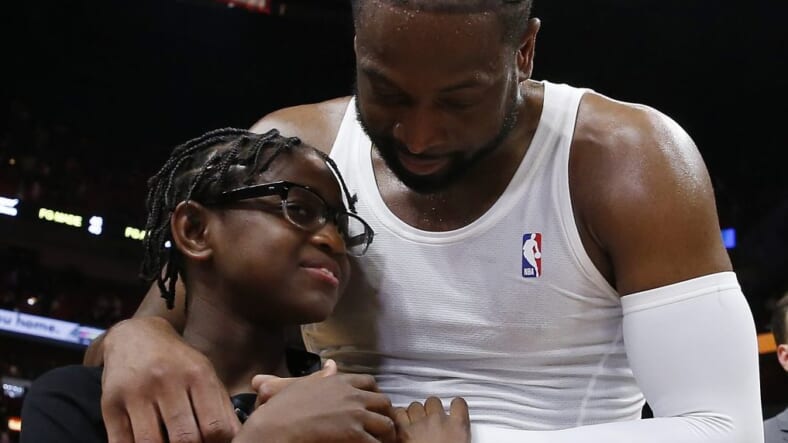 Wade, in fact, said Wednesday on the Matt Barnes and Stephen Jackson Showtime podcast All the Smoke that it was his son who taught him, the parent, about acceptance and maturity. Zion is Wade’s son from a previous relationship.

“You want to talk about strength and courage,” the 37-year-old former Miami Heat guard asked the hosts. “My 12-year-old son has way more than I have.”

Wade added, “You can learn something from your kids.”

Wade, Union and the rest of their blended family have received backlash on social media since the release of a Thanksgiving family photo that showed Zion wearing a crop top and long painted nails.

Wade responded on Twitter, “Stupidity is apart of this world we live in — so I get it. But here’s the thing — I’ve been chosen to lead my family not y’all. So we will continue to be us and support each other with pride, love & a smile!”

I’ve seen some post-thanksgiving hate on social about my family photo. Stupidity is apart of this world we live in—so i get it. But here’s the thing—I’ve been chosen to lead my family not y’all. So we will continue to be us and support each other with pride, love & a smile! ✌?

On the podcast, Wade said that he noticed early on that his son was on a different “vibe” than his older brother, Zaire Blessing Dwyane, now 17. This forced him to have a crucial conversation with himself, he explained.

Wade said the dynamic has pushed him into becoming the best father that he can be.

“I watched my son, from day one, become into who she now eventually come into,” he said. “And for me … nothing changes in my love. Nothing changes in my responsibilities. So all I had to do now is get smarter, educate myself more. And that’s my job.”