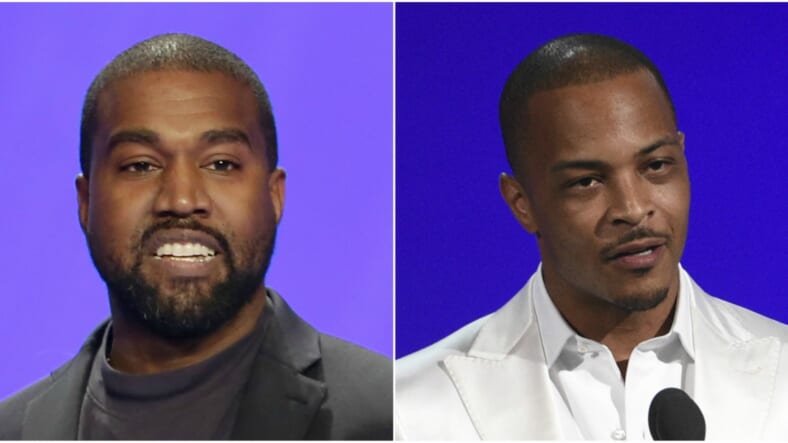 Kanye West used the one-year anniversary of his Sunday Service to give some public support to a fellow rapper and his quest to preserve his adult daughter’s sexual purity. It wasn’t noticeably embraced by his Los Angeles audience, and didn’t seem to be a completely logical fit with the rest of his message.

In the midst of his service at Union Rescue Mission, a homeless shelter in Los Angeles, Kanye gave a shout-out to the embattled T.I., whose discussion about taking his daughter annually to assure that her hymen is intact (and thus, in his mind, her virginity) set off a public firestorm.

For his part, however, T.I., later appeared on Jada Pinkett Smith’s Facebook Live show ‘Red Table Talk’ and contritely explained that he did not mean to be taken literally when he made the comment.

Still T.I.’s actions, West told the crowd, were “God-approved,’’ as opposed to “devil-approved,’’ in video shown on TMZ.com. His remarks before and after that were about the appreciation of his presenting his Sunday Service for an entire year, and about multiple states’ death-penalty statutes and “a worldwide solution” to the homeless problem personified by the location of that current service.

“They tryna play T.I., but he’s talkin’ about somethin’ that’s God-approved,” West told the crowd in the clip TMZ showed. The New York Post said the comment, was “met by silence from the audience.’’ That differed from the louder, more positive reactions to his later remarks about his Sunday Services being an “alternative to opioids” and an “alternative to pornography.’’

READ MORE: Killer Mike calls out T.I. and Candace Owens for arguing over ‘who got the best master’

On the TMZ video snippet, West prefaced his T.I. comment with one about how “people love to take a soundbite and say, ‘This was not exactly devil-approved by the internet.’ ” That appeared to refer to the avalanche of online condemnation following T.I.’s remarks about his daughter.

West also randomly mentioned talking to Elon Musk and, calling it a “shameless name-drop,” alluding to a discussion with him about homelessness and addiction problems commonly confronted by Union Rescue Mission.