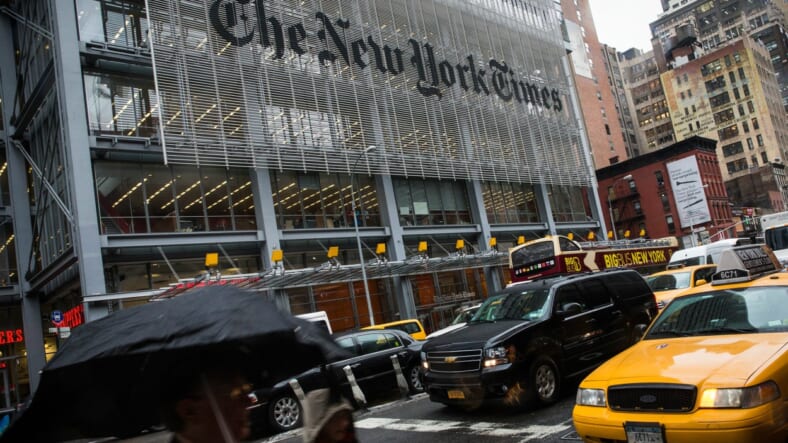 What is probably the most well-known news organization in the world has doubled back on an opinion piece, cutting out a reference to an academic paper co-authored by an alleged white nationalist.

The New York Times removed references to a 2005 study from a column by Bret Stephens titled “The Secrets of Jewish Genius,” The New York Post reports. The piece that claims Ashkenazi Jews have the highest average IQs was partly authored by the late Henry Harpending, an anthropologist listed by the Southern Poverty Law Center as a White nationalist, according to the Post.

Stephens wrote in his piece published Friday that Jews “are, or tend to be, smart” and “might have a marginal advantage over their gentile peers when it comes to thinking better.”

Social media blew up when the piece was published, with social media users saying the opinion piece did nothing to support harmony.

“I don’t know who needs to hear this, but Jews are normal people,” posted Moshik Temkin, @moshik_temkin. “Some are smart, some are dumb, and most are somewhere in-between.”

Temkin added, “You should be suspicious of anyone who thinks Jews are special — that’s a big part of antisemitic thinking.”

U.S. Sen. Brian Schatz, a Democrat from Hawaii, who is Jewish, joined the debate too, tweeting that the piece “crossed a very important line.”

The Southern Poverty Law Center, an organization in Mongtomery, Ala., that tracks hate, posted that the study “traffics in centuries-old antisemitic tropes.”

The editor’s note on the Times piece indicated that Stephens was not “endorsing the study or its author’s views, but it was a mistake to cite it uncritically.”

The note continued, “The effect was to leave an impression with many readers that Mr. Stephens was arguing that Jews are genetically superior. That was not his intent.”

The note concluded that Stephens “went on instead to argue that culture and history are crucial factors in Jewish achievements.”