R Kelly’s live-in girlfriends get into apparent brawl on video, police called to his condo 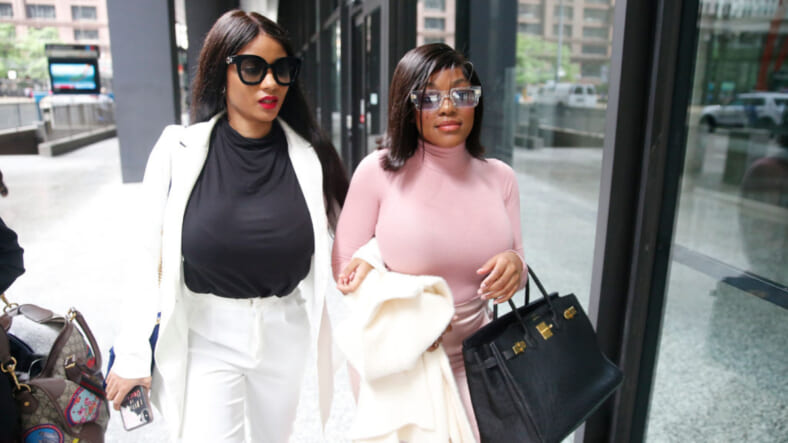 Supporters of singer R. Kelly, Azriel Clary and Joycelyn Savage, leave after the singer’s arraignment at the Dirksen Federal Building on July 16, 2019 in Chicago, Illinois. (Photo by Nuccio DiNuzzo/Getty Images)

Police have been called to R. Kelly’s home in Chicago after his 2 girlfriends got into a vicious physical altercation caught on camera.

According to TMZ, Wednesday afternoon, Chicago PD arrived on the scene in response to a reported battery at Kelly’s Trump Tower condo. This took place shortly after Azriel Clary and Joycelyn Savage were seen coming to blows on Instagram Live.

Prior to things getting violent, Clary appeared to be collecting her things to move out when Savage came into the room. A verbal argument quickly ensued as Clary explained she was looking out for herself. At some point she reportedly threatened to tell police that Savage was having sex with a minor and send her to jail.

In a matter of moments the verbal disagreement became physical and there appeared to be at least two other people in the room who tried to break up the brawl as the camera fell to the ground.

Clary also told viewers watching on IG that R. Kelly’s “been lying to you guys” and alleged that he had her and Joycelyn lie for him too. Following the fight Clary was taken to a local hospital for further evaluation.

READ MORE: Joycelyn Savage claims R. Kelly forced her to have a surgical abortion at home, a report says

“I have a statement written by Azriel that she provided to me, voluntarily, after Robert was already in jail, that said she never had sex with him when she was under aged,” Kelly’s attorney, Steve Greenberg said to TMZ.

But in stark contrast, earlier Wednesday, Clary wrote a cryptic message on her social media stating, “Today is a good day to go to jail. I know where the skeletons are buried. You wanna play chess, let’s play (: for the entire world to see.”

Meanwhile, Kelly is spending his 53rd birthday in federal custody with charges in both New York and Illinois on child pornography and obstruction charges. This is in addition to the multiple state charges of sexual abuse of minors. He has pleaded not guilty to those charges and was rumored to be working out a possible plea deal on the federal charges, according to the Chicago Tribune.

#PressPlay: Part 1—While #RKelly is celebrating his birthday in jail, his girlfriends #JoycelynSavage and #AzrielClary were back at the crib putting the paws on each other ?