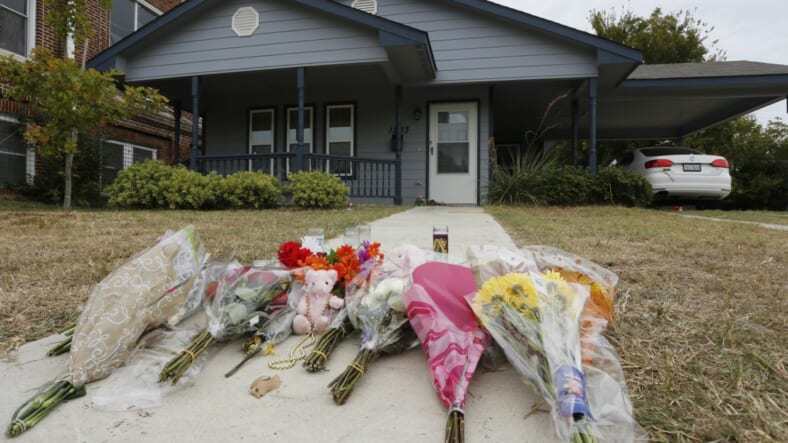 Flowers lie on the sidewalk in front of the house in Fort Worth, Texas, where a white Fort Worth police officer Aaron Dean shot and killed Atatiana Jefferson, a black woman, through a back window of her home. (AP Photo/David Kent, File)

Yolanda Carr, the mother of Atatiana Jefferson, who was fatally shot in her home by a Fort Worth police officer, has died after an illness, an attorney for the family announced.

According to The Dallas Morning News, medical personnel were called to her home Thursday morning. Her exact cause of death is unclear but it comes just months after Jefferson’s father, Marquis Jefferson, 58, died of a heart attack in November.

“He ultimately just succumbed to, I don’t know, I can only say a broken heart,” Bruce Carter, a family spokesman told CNN. “He just never recovered from the grieving process.”

We just learned Yolanda Carr, the mother of #AtatianaJefferson, passed away in her home early Thursday morning. Atatiana was killed by a Fort Worth, TX police officer while serving as the caregiver for Ms. Carr who had recently taken ill. Memorial Service details will follow. pic.twitter.com/3YkSdCzuu4

On Oct. 14, Fort Worth police officer Aaron Dean fired at Jefferson, 28, through a back window of her home while responding to a welfare check, killing her.

Jefferson had just recently moved in with her mother, who had health problems and needed assistance. She was playing video games with her 8-year-old nephew just moments prior to the shooting. Her eldest sister Ashley Carr has said she was having a fun night in, “where no one would have expected her life to be in harm’s way, especially not at the hands of a civil servant who had taken the oath to serve and protect.”

READ MORE: Cop that killed Atatiana Jefferson responded as if there was a burglary

She reportedly tried to protect the boy from what they thought was a burglar just before the shooting started and may have saved his life.

CNN confirmed that Jefferson’s 8-year-old nephew actually witnessed his beloved Aunt “Tay” slain. After witnessing that trauma, he was also tasked with breaking the news to his mother that her sister was gone.

“He saw her when she fell,” Lee Merritt, an attorney for Jefferson’s family told the network. “He was present the entire time. He never left the room.”

In 2014 Jefferson earned a degree in biology from Xavier University of Louisiana but tending to her mother’s failing health didn’t stop her from pursuing her professional and academic dreams. In fact, she sold medical pharmaceutical equipment from her home and was excited about her plans to apply to medical school.

Meanwhile, Dean, 35, was indicted by a grand jury last month on charges of murder just a day after resigning from the force. Judge David Hagerman, who is presiding over the case  has issued a gag order, according to CBS Dallas-Fort Worth.

“We do understand that that day in court has a lot of challenges that we will still have to face, so we’re still trying to embrace what’s next,” said Carr, told the station. She said the family is hoping for a special prosecutor in the case.