OPINION: For someone who calls herself a fitness expert, her view of Lizzo's body seems more grounded in shaming than concern for people who are plus-sized 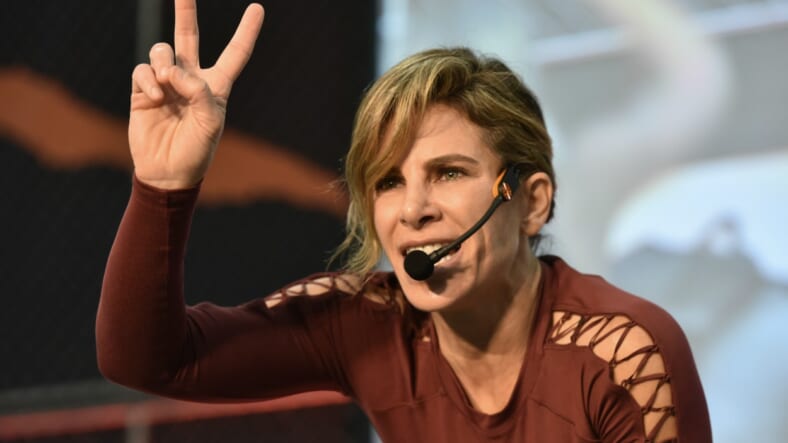 This week, fitness expert and personal trainer Jillian Michaels is facing a ton of well-deserved backlash after she went on a publicity tour telling anyone who would listen how much it annoys her that fat women are now being allowed to like themselves.

The foolishness first kicked off Tuesday, when Michaels appeared on The Wendy Williams Show, and smugly explained why she’s not a fan of the body positivity movement’s growing popularity.

“There was so much fat-shaming for such a long time that now the pendulum has swung to a place where it’s like, ‘You are 250 pounds and you’re owning it! Go!’ And I’m like, wait wait wait, no no no…,” a visibly frustrated Michaels told Williams. “When you start to celebrate that… it’s not about shaming, it’s not about excluding anyone, but we also don’t want to co-sign cancer, heart disease, diabetes.”

READ MORE: Insta-FAB! 10 Bold and Beautiful Body-Positive Influencers You Should be Following

At one point when Williams shared that she fasts twice a week — a practice that has not only been shown to have enormous medical benefits for people as they age, but is also practiced by many cultures for spiritual reasons — Micheals rolled her eyes so far back in her head it’s a wonder she wasn’t able to dislodge them.

During the segment she also compared plus-sized people to alcoholics and cited her past as an “overweight kid” as the motivation behind her “concern” for the overweight community.

Now, I don’t know if Williams fell for this smokescreen, but my alarm bells went off something fierce as I watched the broadcast. Because years of living in a plus-sized body have taught me to smell the difference between a blunt health expert sharing an ugly truth, versus a self-loathing charlatan trying to cover up their own body dysmorphia by hyper-focusing on the appearance of others.

Just when I’d shaken off my suspicions about Michaels from her Wendy Williams appearance, Wednesday, news broke, that she’d appeared on Buzzfeed News’ morning show AM2DM, where she somehow found it in her spirit to direct her ire not only at Lizzo but also towards anyone who saw it fit to NOT hate her for being a big girl.

“Why are we celebrating [Lizzo’s] body? Why does it matter? That’s what I’m saying,” said Michaels.

Let’s be clear, this line of questioning is a common tactic of phobic people. When someone who has a disdain towards a minority and/or marginalized group, sees that group being applauded for the very thing they dislike about them, they will often try to gaslight their supporters by asking “Why does this matter anyway?”

The inquiry is disingenuous AF because they’re actually very clear why it matters given arguably it matters to them more than anyone.

“Why aren’t we celebrating her music? Because it isn’t going to be awesome if she gets diabetes… ” Michaels, 45, continued. “I love her music, my kid loves her music, but there’s never a moment where I’m like, ‘And I’m so glad she’s overweight!’”

JILLIAN MICHAELS GETS FLAK OVER LIZZO COMMENT: The co-hosts discuss the celebrity fitness trainer facing backlash online after she voiced her opinion about the singer’s body in a recent interview. https://t.co/dL9vHcheVt pic.twitter.com/PDKQU1DJ2H

If Michaels’ problematic stance on The Wendy Williams Show was a spark, the increased boldness of her stance in this interview ignited the flame of backlash that she probably wanted all along.

Because let’s not be naive here, for a washed-up personal trainer with little star quality, whose built her career on the backs of overweight contestants on The Biggest Loser, taking aim at the most successful plus-sized woman in the game right now is a win for her on all fronts. She has nothing to lose since being linked to Lizzo suddenly makes her relevant for the first time in like… a decade.

This theory is only further substantiated by Michaels’ response to the controversy which saw her doubling down on her previous statements.

“I’m a health expert, for decades I have said repeatedly that your weight and your size have no bearing or merit on your value, your beauty, your worth, your ability,” she explained during an interview with TMZ. “Where it does have relevance is your health. And to pretend that it doesn’t is not only irresponsible, it’s dangerous, and it’s just not a lie I’m willing to tell because it’s politically correct.”

Ok girl. Whatever you say.

To her credit, Lizzo, who is probably all too aware of the stunt that Michaels was trying to pull, circumvented responding to her directly, and instead took to her Instagram to issue an empowering message to her 7.3 million followers.

“Today’s mantra is: This is my life. I have done nothing wrong,” she wrote Thursday. “I forgive myself for thinking I was wrong in the first place. I deserve to be happy,” she captioned a video showing off the skyline view from her room.”

Fat is not a four-letter word

Perhaps what is the most insulting part of all this, (at least for me), is Michaels’ refusal to stand in her truth, which appears to be that she hates fat people, most of all the former fat girl that still lives inside of her.

If she had just come out and said that, yes she’d still be problematic, and of course she’d still get that publicity stunt backlash she so desperately needs for us to even remember she exists, but at least then I’d be able to respect the lady for being honest. However, her insistence on pretending she is speaking out in concern as a health expert is getting harder and harder to swallow.

When Dr. Oz, or any of the other “made for tv” health folks talk about fat and its possible effects on your health, they speak in normal voices, cite data, stay clear of shaming, and instead remind us all that there is no blanket approach to being healthy so we should go see our doctors to get checked out for a more tailored diagnosis.

But with Michaels there is none of that professionalism. Instead, her eyes go wild with frustration when she talks about overweight people, the veins strain in her neck, her body language is agitated, and at times looks like she’s about to spit out blood if you even suggest that it’s possible to be thick and healthy at the same time.

It could not be any more clear that for her, body acceptance feels like a personal affront. Somehow, because she was miserable and hated herself when she was overweight her brain now experiences cognitive dissonance even attempting to comprehend that other people might not be having the same lived experience.

That does a disservice for anyone who comes to her seeking real advice and assistance because lets be clear: fat doesn’t automatically equate unhealthy, just as thin doesn’t always equate being a bastion of health.

In fact, as a plus-sized woman, I can’t tell you how many times in my past I’ve had doctors run blood tests on me and seen the shock on their face when they realized that my numbers were good and that even my cholesterol levels were on point. In my case, it’s always been stress (and aging), more so than my size that’s been the true factor that’s caused me to have to beef up my health regimen.

Meanwhile Bob Harper, Michaels’ former co-host and trainer on The Biggest Loser, spent decades walking around looking like a fitness model, and yet ended up having a frigging heart attack while he was in the gym.

The fact that I have a cleaner medical history than a celebrity fitness trainer illustrates exactly why Micheals’ oversimplified, “stop celebrating big bodies” rhetoric is impossible to take seriously.

I know skinny women who have diabetes. #JillianMichaels needs to STFU about Lizzo. #TheView pic.twitter.com/26v8NE2VhP

Is weight a factor in determining one’s health? Of course, it is. But as Harper’s unfortunate health scare proves, it isn’t the only factor. Not to mention, studies have shown time and time again that shaming people not only doesn’t help people maintain weight loss it actually makes them more prone to repeat a cycle of drastically gaining and losing weight, which ironically strains the heart a lot more than just being plus-sized, active and happy.

I’ve actually lost count of how many articles have exposed Michaels and her cohorts for how their extremist “get thin by any means necessary” antics have ruined the lives of former The Biggest Loser contestants, with the vast majority of them gaining ALL the weight back.

Some have even gone as far as to say, “It’s a miracle no one has died yet,” from following the program.

So you don’t have to take my word for any of this. The receipts that show this lady is wrong, not just socially but also medically and psychologically — are bountiful.

Which is why I can say without a shred of hesitation that Jillian Micheals, and anyone who walks around spewing out the fear-mongering shite she does, can respectfully, kiss my big, beautiful, healthy Black a**.