Rep. Ayanna Pressley says she lives with alopecia, reveals herself without hair 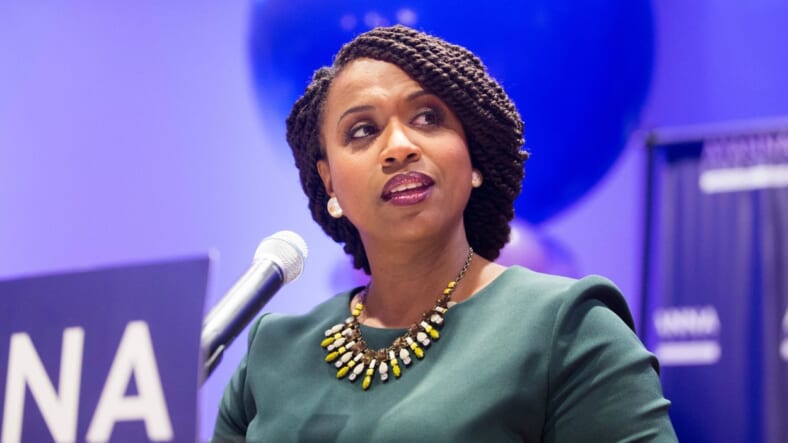 Rep. Ayanna Pressley is known as being a straight shooter and high-profile member of “The Squad,” of Democratic freshman lawmakers, but now the Massachusetts congresswoman has come forward to reveal a more vulnerable side of her life and gets candid about a condition she shares with many others.

During an interview sit down with The Root, Pressley admitted that like many Black women she loves playing around with different hairstyles and lately has even been incorporating the versatility of lace-front wigs to switch things up.

But the Pressley, 45, decided to take a break from the Senegalese twists she is usually known for because it isn’t just a style choice, it’s also become a necessity because she is living with alopecia, a condition in which hair can fall out in patches.

“I think it’s important that I’m transparent about this new normal,” Pressley explained.

"My twists have become such a synonymous & a conflated part of not only my personal identity & how I show up in the world, but my political brand. And that's why I think it's important that I'm transparent about this new normal & living with alopecia." — @AyannaPressley pic.twitter.com/jqraqZeiKr

Although there are many, some common types of alopecia include alopecia areata, which can happen to any part of the body, including the scalp and is caused by the immune system attacking the hair follicles; alopecia totalis, which causes complete baldness on the scalp; and traumatic alopecia, which comes from chemicals, scarring or tension on the scalp or hair follicles cause hair loss. Other forms of alopecia can be caused by many things ranging from different types of illnesses to physical or mental stress and even radiation or chemotherapy treatments.

The Root quoted a study done last year by the Journal of the American Academy of Dermatology which found that African Americans are affected by alopecia at higher rates than other racial categories. Further, a Boston University study of more than 5,000 Black women showed that almost 48 percent of them experienced hair loss.

As many as 6.8 million people in the United States are affected by alopecia and people have a lifetime risk of 2.1% of contracting it. Most often, the ailment first appears in childhood. It affects people of all backgrounds. Treatments available include oral and injectable medications, according to the National Alopecia Areata Foundation.

Pressley says she became aware of her condition last fall after getting her hair braided and repeatedly waking up in the morning to total hair loss across her scalp.

At first, she found innovative ways to conceal her baldness while keeping up with her rigorous political schedule. But when she lost the final piece of her hair that day was significant for a myriad of reasons. Not only was it the evening before Donald Trump’s impeachment vote in the House of Representatives, it was also the anniversary of her mother’s death.

Fortunately, her friend, political commentator Angela Rye, connected her with hair magician Jamal Edmonds who quickly created a custom wig for the Congresswoman in mere hours so she could deliver her vote to impeach President Trump.

“When I saw myself in the mirror, he had done a beautiful job, but I did not recognize myself,” she said. “I was wearing this wig, fully clothed. But in that moment, I couldn’t recall the last time I’d ever felt more naked.”

Pressly is not the only high-profile person to reveal she is dealing with the condition. Actress Jada Pinkett Smith said in 2018 on her Facebook show “Red Table Talk” that she also suffers from it.

Even though she is still making peace with her alopecia, Pressley said she is finally ready to publicly step in her truth rather than run from it.