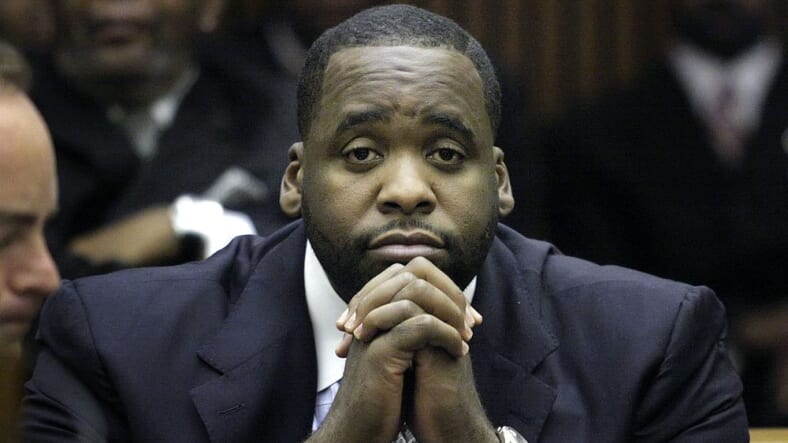 DETROIT - OCTOBER 28: Former Detroit Mayor Kwame Kilpatrick appears in Wayne County Circuit Court for his sentencing October 28, 2008 in Detroit, Michigan. Kilpatrick will spend 4 months in jail as part of a plea deal he accepted back in September in which he plead guilty to two felonies and no contest to a felony assault charge. (Photo by Bill Pugliano/Getty Images)

Peter Karmanos Jr., who founded Compuware, is asking President Donald Trump to commute the sentence of former Detroit Mayor Kwame Kilpatrick, who was convicted in 2013 on racketeering and corruption charges and sentenced to 28 years in prison.

Karmanos forwarded a letter authored by Kilpatrick to Trump, requesting that the president commute his sentence as time served. Karmanos said the president’s son-in-law, Jared Kushner, is handling requests of this nature but that Trump is said to be considering it, according to Deadline Detroit.

“I first want to congratulate you for the overwhelming and stunning victories of your Presidential campaign, and also the unprecedented success of your first two-years in office,” Kilpatrick, 48, writes in the April 16, 2019 letter. “You have shaken up the entire world … and that is a great thing to behold. I pray your success daily!”

Karmanos, 76, didn’t elaborate on what else he may be doing on behalf of Kilpatrick to see if he can convince Trump to commute the sentence. He is no longer affiliated with Compuware.

In a recent interview on Charlie LeDuff’s podcast, “The No BS Newshour,” Karmanos called Kilpatrick’s prison sentence a “modern-day lynching” and asserted that Kilpatrick is innocent.

“We had an arrogant mayor, really smart by the way, who sat in my dining room one day and told the governor (Jennifer Granholm) that he was her biggest nightmare. But he’d done absolutely zero,” Karmanos said.

READ MORE: Congress members team up to push The Crown Act which would ban hair discrimination

When LeDuff asked Karmanos why he’s backing Kilpatrick so vigorously, Karmanos replied: “The ‘why’ is 28 years. Are you kidding me? Twenty-eight years for less than really $500 of money from his own campaign fund that got spent, and that’s it? And a two-person RICO (racketeering charge) that added 20 years.”

Kilpatrick was convicted of 24 criminal charges, which also included extortion, mail fraud, and tax violations. He currently resides in a federal prison in New Jersey.

“All the people who convicted him were Democrats, and he’s a Democrat,” Karmanos said. “Barbara McQuade (the U.S. Attorney at the time) was an Obama appointee, the judge, I don’t know very well, all the other people.” Nancy G. Edmunds, a President George W. Bush appointee in 1991, was the sentencing judge.

Karmanos maintains the sentence was excessive and said Kilpatrick shouldn’t have received more than seven years behind bars.

In his letter to Trump, Kilpatrick, a lifelong Democrat, seemed to signal a change in thought, attacking McQuade, whom he said “pursued my prosecution like no other.”