Rep. Gwen Moore and Rep. Ced Richmond are invested in protecting Black people's right to not be penalized due to their natural hair texture or style 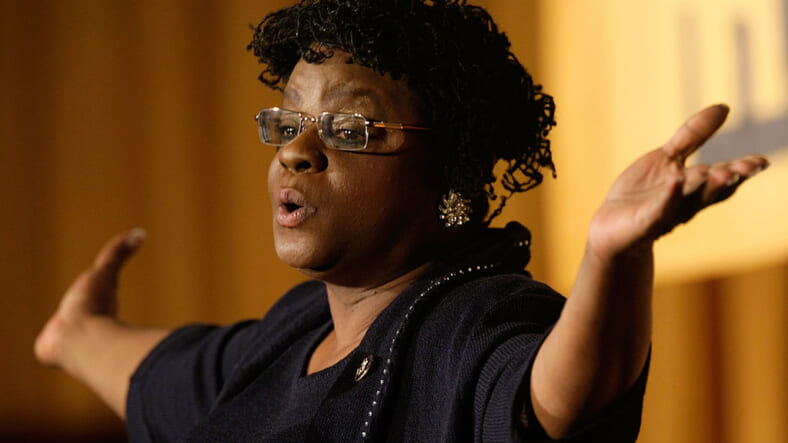 Wisconsin Rep. Gwen Moore has seen discriminatory practices play out in the news, where Black people were asked to cut their hair to attend school or to participate in sporting events or to stay employed, and she is doing something about it.

READ MORE: Catholic high school in California suspends boy for wearing his hair braided, then does about face under pressure

The Democratic congresswoman who represents Wisconsin’s 4th district is teaming up with Rep. Cedric Richmond (D-LA) and roughly three dozen other House Democrats to co-sponsor the CROWN Act, a bill that would ban discrimination based on hair texture or style, including dreadlocks, cornrows, twists and other styles worn by Black Americans. The bill was introduced last month.

“Black women and men have lost job opportunities and been kicked out of school for simply wearing locks, curls, and braids,” Moore said in a statement, according to the Wisconsin Examiner. “This isn’t just about fashion or style. These incidents illustrate why laws explicitly banning this type of discrimination is necessary.”

According to a 2019 study of 2,000 Black and white women, Black women’s hair was found to be more likely to be viewed as “unprofessional.” That report was backed by Dove, a soap and beauty products company that received backlash itself in 2017 for running an ad of a Black woman who removed her shirt and was transformed into a white woman.

The study also found Black women were more often sent home because of their hair, compared to white women. The study found that four out of five Black women admitted to changing their hair from its natural state so they could fit in at work.

“Unfortunately, presenting yourself in a natural way can be difficult as an African-American woman,” Moore said in the statement, reported the Wisconsin Examiner. “We are more vulnerable to criticism and discrimination at the workplace, and that can hinder our success.”

However, Black men have also experienced hair drama in white schools and workplaces.

“This is about men as well,” Michigan Democratic Rep. Brenda Lawrence told the newspaper. Lawrence cited New Jersey wrestler Andrew Johnson, who was told he couldn’t finish his wrestling match if he didn’t cut his locs. He cut his hair and finished the match.

Also, Penn State football player Jonathan Sutherland was sent a letter in which he was told his dreadlocks were “awful” and “disgusting,” reported the New York Times.

“The whole thing is to stamp out discrimination,” Rep. Dwight Evans of Pennsylvania told the Wisconsin Examiner in an interview. “That’s the message to it all.