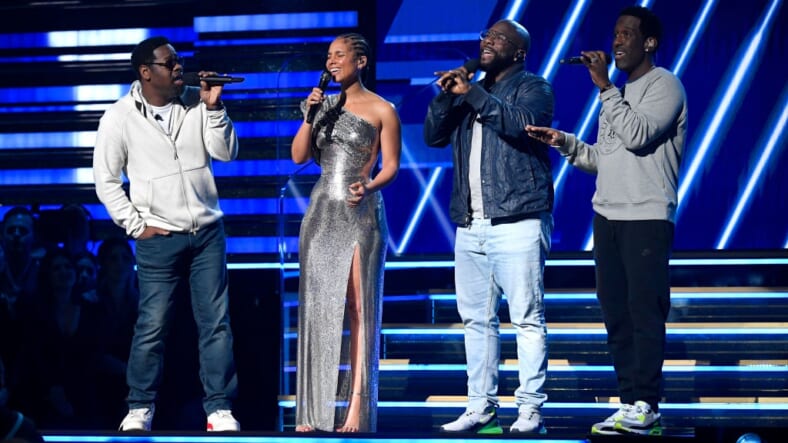 The 62nd Annual GRAMMY Awards were shrouded in a dark cloud of sadness when the world learned of Kobe Bryant’s sudden passing early Sunday afternoon.

The iconic basketball star and his 13-year-old daughter Gianna ‘Gigi’ Maria Onore Bryant were killed in a helicopter crash in California on Sunday alongside seven other people.  The group was headed to Mamba Sports Academy training facility for athletes.

LOS ANGELES, CALIFORNIA – JANUARY 26: An image of the late Kobe Bryant is projected onto a screen while host Alicia Keys (2nd from L) and (from L) Nathan Morris, Wanya Morris, and Shawn Stockman of music group Boyz II Men perform onstage during the 62nd Annual GRAMMY Awards at STAPLES Center on January 26, 2020 in Los Angeles, California. (Photo by Kevin Winter/Getty Images for The Recording Academy )

Shortly after her opening words, Keys sang the first notes of a song that has become a staple in the Black community following the loss of a loved one, “It’s So Hard To Say Goodbye To Yesterday.”

She was then joined by iconic R&B group Boyz II Men in a touching tribute to Kobe, his daughter Gianna and the seven others that lost their lives in the tragic accident.

“We wanted to do something that could describe a tiny bit [of] how we all feel right now,” Alicia shared. “We love you Kobe.”

Watch a clip from the powerful performance below.