R. Kelly’s ex-girlfriend claims the singer has “hundreds of victims” in cities across America

Azriel Clary alleges that he films them engaging in acts of child pornography; if they implicate him, they’d also implicate themselves 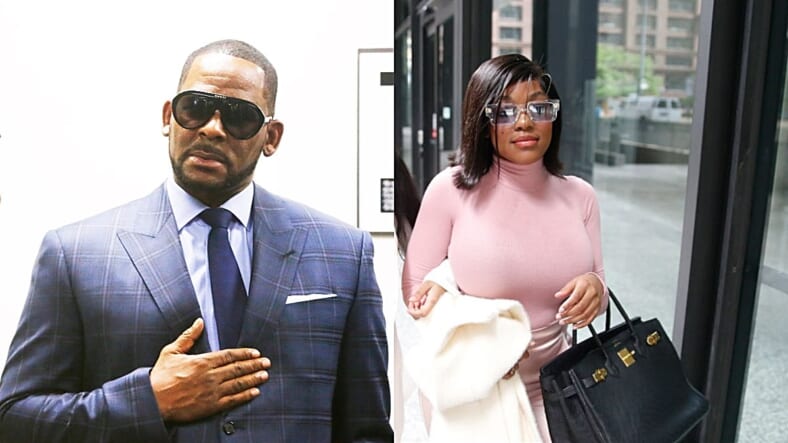 Azriel Clary, who is known as one of R. Kelly's longtime girlfriends, has decided to move out of his Trump Tower condo in Chicago. (Photo provided by Getty Images) Sources close to Azriel Clary

Embattled R&B singer R. Kelly has hundreds of victims across America, but he allegedly filmed them engaging in acts of child pornography and blackmailed them into remaining silent, according to his one-time girlfriend.

In an exclusive interview with The U.S. Sun, Azriel Clary alleges that Kelly filmed women sexually molesting children or performing other sexual acts and held it over their heads as his assurance that they would not report him to authorities. His rationale was if they implicate him, they’d also implicate themselves.

“I think that there’s hundreds of victims out there. Robert has his live-in girlfriends; he has girlfriends in every city. He has flings in every city. There’s usually three main cities in every state. So, three times 50 —that lets you know how many women are probably out there and that’s probably not even hitting it on the nail,” Clary, 22, told The U.S. Sun. “For the most part, he blackmails everyone. He makes everyone do very degrading stuff, whether on film or writing it down, he makes them sign it. And I think a lot of women are ashamed or embarrassed to come out because of stuff like that because it’ll be incriminating them —there’s so much stuff.”

“He has letters from people saying that they’ve been molested or touched by their parents or their brothers or a family member,” Clary added. “He even has people on film molesting their younger nieces or younger brothers. And so, I know a lot of women out there are too embarrassed, humiliated, and ashamed to come out because this man had that much power to control them, to make them molest their younger niece or to molest their younger brother. Personally, had I ever done anything like that, I would be entirely too ashamed to come forward. Thankfully, I’ve never been in that situation. But have I seen it done to other women? Yes, I have.”

Kelly has been in prison since last year. He faces numerous sexual assault charges as well as federal child pornography and racketeering charges.

Steve Greenberg, a lawyer for R. Kelly, said Azriel’s allegations are not only false but that they contradict many earlier statements from her.

“We are surprised to learn that Ms. Clary is now making these allegations. Restricted by the protective orders the prosecution requested, we are not able to litigate these matters in the press. However, the information provided is directly contrary to facts that have been brought forward by Ms. Clary in the past,” Greenberg said to The U.S. Sun. “The facts she is now reciting are directly contrary to her numerous other accounts, as well as —in certain instances— what we expect to be the documentary proof from sources not involved in any of the pending cases. In sum, Ms. Clary had a long-term consensual relationship with Mr. Kelly. It continued after he was arrested when she was free to do as she wished. It is clear that she now seeks to benefit from their relationship. The allegations are not true.”

Clary also accused Kelly of verbally, physically and emotionally abusing her. She said she met him at a concert when she was 17 and that she quickly became one of his live-in girlfriends.

She recalled one incident in which she said Kelly got enraged with her and beat her with his size 12 shoe for hours while she was naked. Her offense? Clary alleges, he beat her for talking on the phone to high school friends.

“I was talking to my friends from high school and he didn’t like that I was still talking to them …he thought that I was keeping things from him,” Clary told The U.S. Sun. “I was just in communication with two of my girlfriends and he made me text them a very long lie, basically saying why I no longer wanted to be friends with them. And then he beat me with a shoe —a size 12, Nike Air Force One shoe. And he beat me all over, it felt like hours and I was covered in welts all the way from my neck down.”

She said Kelly had another girl bathe her afterwards.