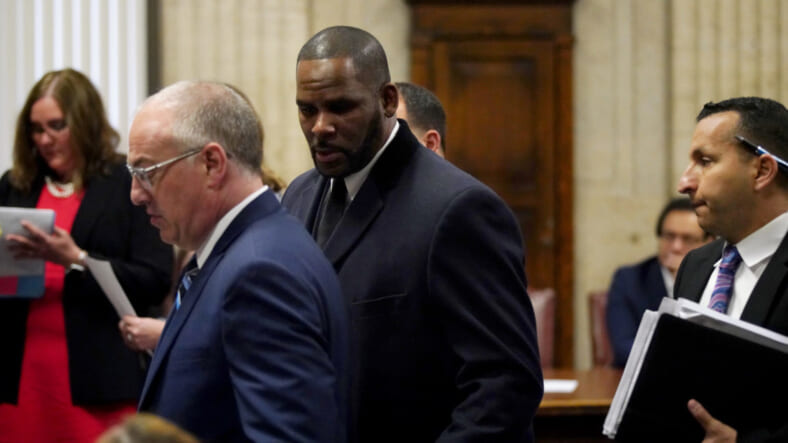 According to a new court filing, witnesses have come forward and informed federal prosecutors that in 1994 R. Kelly married his protégé Aaliyah in an attempt to avoid criminal charges and prevent her from testifying against him.

According to the Chicago Sun-Times, authorities also believe that last year the disgraced singer somehow managed to sneak a letter into the federal jail where he’s being held and then gained access to an “unmonitored line” to make a private phone call.

Prosecutors argue that these alleged incidents are amongst the many reasons why Kelly and his lawyers cannot be allowed to learn the identities of two of the alleged victims in the case he is currently facing in federal court in Brooklyn, N.Y. They argue that Kelly’s resistance to following the rules illustrate a “consistent pattern” of obstructing law enforcement.

“Simply put, the defendant’s past behavior reveals that if given the opportunity to influence a potential witness, the defendant will take it, and his incarceration may not be enough to prevent such conduct,” prosecutors wrote.

However, Wednesday, Kelly’s lawyer Steve Greenberg, maintained that “the defense cannot conduct any investigation or adequately prepare for trial without knowing who each of the supposed ‘victims’ are.”

In the court documents, Aaliyah, who passed away in 2001, is only referred to as “Jane Doe #1” but the details alleged in the case make her identity clear.

“Witnesses have advised the government that the defendant engaged in this bribery scheme to obtain a marriage license so he could quickly and secretly marry Jane Doe #1 to avoid criminal charges for engaging in a sexual relationship with Jane Doe #1, who was a minor at the time,” prosecutors wrote. “Specifically, the defendant believed that his marriage to Jane Doe #1 would prevent her from being able to testify against him in the event he were prosecuted for his criminal sexual relationship with her.”

According to the Sun-Times, a revision of the federal indictment in Brooklyn says that Kelly was accused of hatching a bribery scheme to obtain a phony identification for the then-15-year-old Aaliyah in 1994 when they were married.

Kelly is being held in federal custody in Chicago, where he has been since his July arrest. In his federal case, he faces child pornography and obstruction of justice charges in Chicago and racketeering charges in Brooklyn. He also faces local sexual abuse charges in Cook County, Ill., and in Minneapolis.