Many people are making tributes to honor the 'Black Mamba,' but few have made as a grand a gesture as these two Lakers superstars 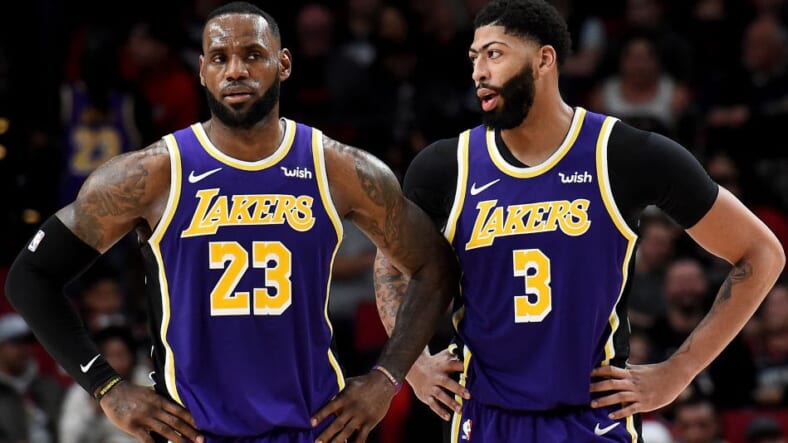 PORTLAND, OREGON - DECEMBER 06: LeBron James #23 and Anthony Davis #3 of the Los Angeles Lakers speak during a time out in the second half of the game against the Portland Trail Blazers at Moda Center. (Photo by Steve Dykes/Getty Images)

LeBron James and Anthony Davis got new tats on Wednesday that pay homage to the late Lakers legend, Kobe Bryant.

Both tattoos were done by Vanessa Aurelia. James’ tattoo appears to be a Black Mamba snake with some words believed to be either “Kobe 4 life” or “Mamba 4 life.” Davis’ body art is Lakers’ purple but the image was hard to decipher, reported TMZ.

James’ leg tattoo was visible under a fresh wrap during the Lakers Thursday workout in El Segundo.

News outlets reported Bron may take to his Instagram page with a full picture of the tattoo sometime before the Lakers suit up to take on the Portland Trail Blazers at Staples Center Friday night. The game will mark the Lakers’ first time playing since Bryant died.

The NBA is still reeling from the helicopter crash on Sunday that claimed the lives of Bryant, 41, his 13-year-old daughter, Gigi, and seven others. Tributes continue to pour in from players, fans, teams, and the NBA league, which recently announced it would change its 2020 All-Star Game format to include several tributes to Bryant, according to Cleveland.com.

The first three-quarters of the All-Star Game will be played as mini-games for charity. Each quarter will be 12 minutes long and start with a score of 0-0. The team with the most points at the end of each quarter will win $100,000 for a Chicago charity. After the first three quarters, the teams will start the last quarter with all of the points they’ve accumulated in each quarter. The final target score will be reached by adding 24 points (Kobe Bryant’s jersey number) to the leading team’s tally. The fourth quarter will be untimed, with the first team to reach the targeted score declared the winner.

The team captains for the 69th NBA All-Star Game include Giannis Antetokounmpo of the Milwaukee Bucks leading Team Giannis and Team LeBron led by the Los Angeles Lakers’ James.