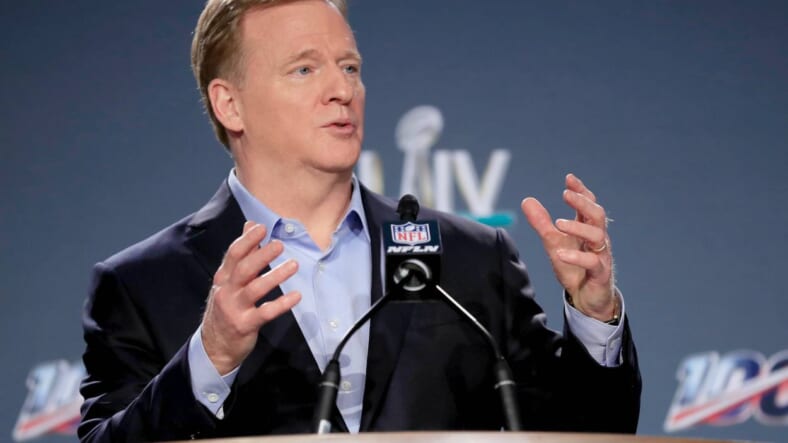 While the world mourns the shocking and untimely death of NBA superstar Kobe Bryant, NFL commissioner Roger Goodell has confirmed the league’s plans to honor him on the biggest day of the season.

According to NFL.com, Wednesday, during his annual “State of the NFL” press conference Goodell revealed that the legendary LA Laker will be honored during Super Bowl LIV, as first reported by ESPN’s Field Yates. This memorial will take place exactly one week to the day that Bryant died, along with his 13-year-old daughter, Gianna and seven other passengers in a helicopter crash outside Los Angeles.

“I don’t think just Los Angeles is mourning the loss of Kobe Bryant. Kobe was a special person,” Goodell said. “I did have the opportunity to meet him. He obviously brought a lot to our world and I think all of us not only feel for the tragic events to his family but as well as everyone else who was a passenger on that helicopter. It’s hard to understand and it’s hard to process.

The commissioner noted the Bryant tribute Sunday during the league’s annual Pro Bowl, and explained that there was also a moment of silence ahead of the official Super Bowl Opening Night on Monday.

“I’m proud of, as the story unfolded unfortunately on Sunday, the way our players, the way our league responded, including a moment of silence during the [Pro Bowl] game, put his picture up and the way the fans responded to that,” he concluded. “So we as a league have been very responsive and I think respectful of somebody who contributed so much to sports. We also lost one of our own legends last night, Chris Doleman, who I personally was very fond of and meant a great deal to me and the league. I think both of those individuals will be seen on Sunday in some fashion in a respectful way.”