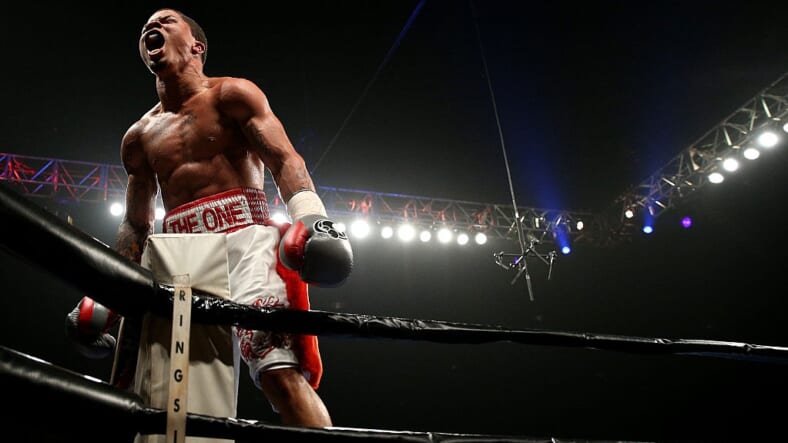 Boxer Gervonta Davis is under fire this morning after a video surfaced of him physically assaulting a woman believed to be his daughter’s mother at a public event.

In the 15-second video posted by the @mr_luares Twitter account, Davis is seen at a celebrity basketball game in Miami on Saturday grabbing a seated woman by the collar or throat and lifting her from her seat as both appear to be arguing. Two men at the game walk quickly toward the pair and as soon as a third man who was seated next to the woman moves aside, the four all walk out of the arena.

Later on in a post to his Instagram stories, Davis, 25, strongly denied harming the young woman. The boxer has since deleted all posts and stories from that personal account.

“I never once hit her,” he posted. “Yea, I was aggressive and told her to come on … that’s the mother of my child I would never hurt her.”

READ MORE: Serena Williams gets boxing lessons from Mike Tyson: ‘She has some power’

Davis’ advisor, Lorin Chvotkin, told the Baltimore Sun he would have no comment on the incident.

Davis, a native of Baltimore, now lives and trains in Atlanta.

This is not Davis’ first skirmish with potential assault.

One year ago, a magistrate in Fairfax, Va., issued an arrest warrant for Davis on a misdemeanor assault charge in connection with an alleged altercation at a mall in Virginia. Davis had been scheduled to appear in court last May on the charge, but he reached a settlement with the other party first and charges were dropped, the Sun reported.

Davis also has faced previous assault charges that were later dropped after allegedly punching a childhood friend in the head back in 2017, as well as engaging in alleged disorderly conducted for a reported street fight in 2018, Yahoo Sports reported.

On Dec. 29th, Davis won the World Boxing Association lightweight title in Atlanta after a 12th round knockout of Yuriorkis Gamboa. Davis is a two-time Super Featherweight World Champion.

There have been no arrests or police reports filed, TMZ and the Sun are reporting.

TMZ reported that the altercation began with the two yelling at one another until matters turned physical.