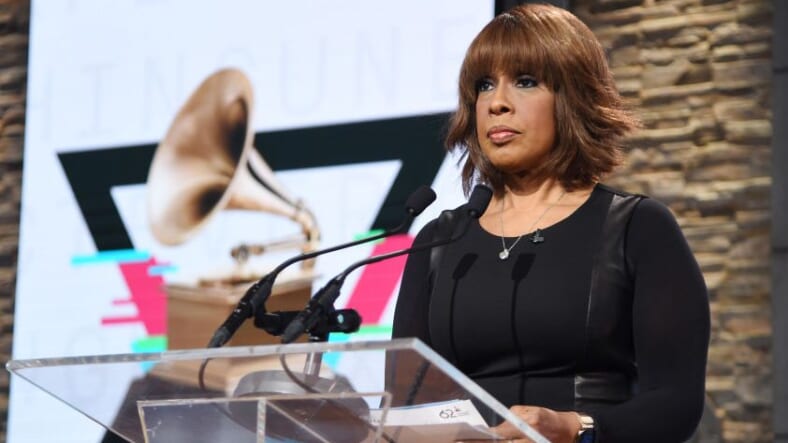 Gayle King said a clip from her wide-ranging CBS interview with former WNBA star Lisa Leslie, where she asked about the Kobe Bryant rape case, was taken out of context by her network.

“I’ve been up reading the comments about the interview I did with Lisa Leslie about Kobe Bryant. And I know that if I had only seen the clip that you saw I’d be extremely angry with me too. I am mortified. I am embarrassed and I am very angry,” King said in an Instagram video. “Unbeknownst to me my network put up a clip from a very wide-ranging interview, totally taken out of context and when you see it that way it’s very jarring. It’s jarring to me. I didn’t even know anything about it. I started getting calls what the hell are you doing, why did you say this, what is happening. I did not know what people were talking about.”

Rappers ranging from Snoop Dog to Boosie BadAzz lit into King on social media posts of their own. They accused King and Oprah Winfrey of using their platforms to blast Black men.

“You was out of pocket with that sh-t. Way out of pocket,” Snoop said in an IG video, shaking his head. “What do you gain from that? I swear to God we the worse. We the f—–g worse. We expect more from you, Gayle.”

The Doggfather went on to ask the question, “Don’t you hang out with Oprah? Why y’all attacking us. We your people. You ain’t coming after f—–g Harvey Weinstein asking them dumb ass questions.”

He concluded with a warning, “I get sick of y’all. I want to call you one. Is it okay if I call her one? Funky dog-haired b-tch. How dare you try to tarnish my motherf—–g homeboy’s reputation punk motherf—–. Respect the family and back off b-tch before we come get you.”

“Gayle King, why the f— would you ask some shit like that?” Boosie asked on Instagram. Someone in the background could be heard asking “ain’t that Oprah’s friend?” to which Boosie replies: “I don’t give a f—who friend it is. I don’t give a f— if she kin to Obama or Oprah. Why the f— would you do something like that? Why would you do that to your people? You know what people are going through right now, why would you ask a f—— question like that… trying to tarnish somebody’s image? You do that to your own Black people. You sad. I’m fittin to fire your ass up. You sad, bruh. Black people need to stop f—–g trying to hurt Black people for success. That’s all the reason you asked that f—–g shit for to get your numbers up. Give a f— who you kin to.”

And 50 Cent weighed in on the interview. “What is this, wait somebody gotta help me understand why they keep doing this. i apologize for my language in advance let’s talk about this,” he posted of the interview clip.

?what is this, wait somebody gotta help me understand why they keep doing this. ??‍♂️i apologize for my language in advance let’s talk about this. #starzgettheapp #abcforlife #lecheminduroi #bransoncognac

King said CBS advised her to remain quiet and told her the controversy would blow over but she needed to set the record straight.

“I’ve been told or I’ve been advised to say nothing, just let it go, people will drag you, people will troll you, it’ll be over in a couple of days, but that’s not good enough for me because I really want people to understand what happened here and how I’m feeling about it,” Gayle said.

King said she reached out to Leslie, a longtime friend of Kobe’s, to talk about his legacy and their friendship. “We had a really wide-ranging interview, talked about many things – his career, his passion, his sense of humor, the way he was mentoring other people, how he was starting his next chapter,” but she insisted that CBS chose to only highlight the questions regarding the rape case.

“I thought she— it was very powerful— when she looked me in the eye and said it’s time for the media to back off,” King said in her post. “When the interview aired, we got a great reaction to it. I believe Lisa was ok with the interview.”

READ MORE: One of R. Kelly’s two girlfriends says they lied for him during Gayle King interview

“So for the network to take the most salacious part when taken out of context, and put it online is very upsetting with me and that is something that I have to deal with them. There will be a very intense discussion about that,” King added.

King also said she meant “no disrespect” in the interview. She called Bryant “kind and warm” and said she too is “mourning his death.”