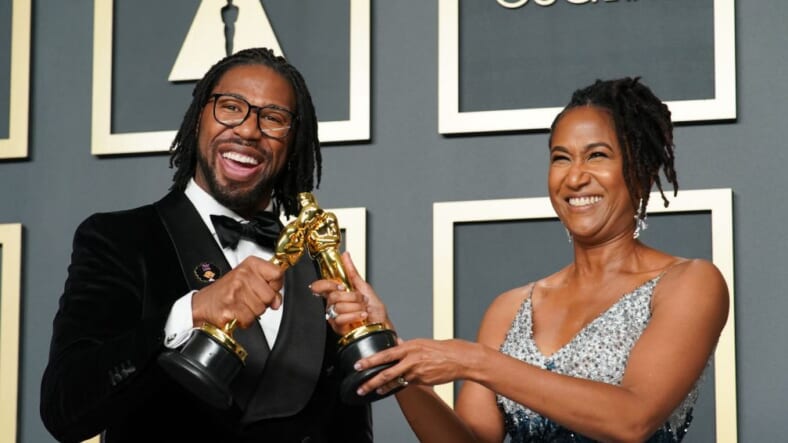 Matthew A. Cherry and Karen Rupert Toliver, winners of the Animated Short Film award for “Hair Love,” pose in the press room during the 92nd Annual Academy Awards at Hollywood and Highland on February 09, 2020 in Hollywood, California. (Photo by Rachel Luna/Getty Images)

Hair Love, the beautiful story about a Black father learning to fix his daughter’s natural hair, nabbed the Oscar for Best Animated Short.

Matthew A. Cherry, former NFLer, wrote and directed the film and Karen Rupert Toliver, along with Cherry, produced it. Other producers were actress Gabrielle Union and retired basketball player, Dwyane Wade. As the team’s guest, they brought DeAndre Arnold, the Texas teenager who was suspended from school and told he couldn’t walk in his graduation ceremony for refusing to cut his locks, to the Oscars ceremony with them.

Cherry dedicated the award to late NBA legend, Kobe Bryant, who himself won in the best animated short category two years ago for Dear Basketball. Cherry said he created the film “to see more representation in animation and to normalize Black hair,” reported The Hollywood Reporter.

“We have a firm belief that representation matters deeply,” Rupert Toliver added on the Oscar stage.

One of the reasons why the celebrity duo, Union and Wade, invited Arnold and his mom to the Oscar ceremony was because they were impacted by his real-life Hair Love story.

“When we heard the amazing story of a young Black father with long beautiful locs just trying to figure out how to do his daughter’s hair, we knew that we had to support any way we could, we had to get involved any way we could — the same way as when we heard about your story and you just wanting to wear your hair the way you want at school,” Union said in a video she posted to social media.

READ MORE: Animated short ‘Hair Love’ is giving us all the feels

After winning the Oscar, Cherry explained that through the film, he hoped to open up the field of animation to more Black stories like Hair Love.

“This was kind of an opportunity, I think, to put a little bit of positivity in animation,” Cherry explained backstage, reported The Hollywood Reporter. “You know, back when we did the Kickstarter campaign back in 2017, there wasn’t a lot of representation in animation. And when I was coming across a lot of these viral videos of dads doing their daughter’s hair, they were just so inherently joyful. Our biggest challenge was just to maintain that joy that made people gravitate towards those videos in the first place. So to be here and doing something like this with Black hair and Black families, it’s just, it’s literally a dream. And I never would have thought in a million years we would win an Oscar for something like this.”