New research confirms that Black students are disproportionately overlooked for the mentally gifted programs ...even if they qualify 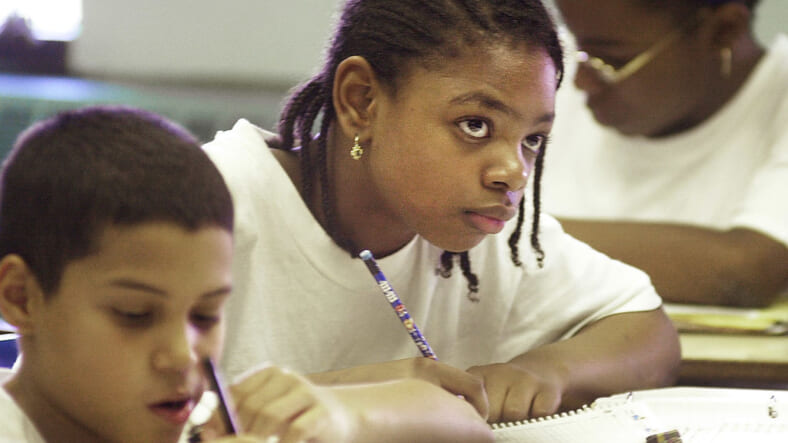 Students at "Knowledge is Power Program" (KIPP) Academy take notes during a Language Arts class October 4, 2000 in The Bronx, New York. The Knowledge Is Power Program educates 200 middle-school students, mostly poor black and Latino neighborhood children, housed in a hallway on the fourth floor of a regular Bronx public schooI. Because of strict discipline where each student gets two hours of homework a night and a regular school day runs nine-and-a-half-hours, including Saturdays and throughout the summer, test scores are the highest in the Bronx. (Photo by Chris Hondros/Newsmakers)

Black students face the harshest discipline in schools across America. They are also less likely to be accepted into gifted and talented programs.

So found a study by the American Educational Research Journal, which examined U.S. Department of Education Office for Civil Rights data from more than 1,880 public school districts nationwide. The study, entitled “Categorical Inequality in Black and White: Linking Disproportionality Across Multiple Educational Outcomes,” found that Black and white students have sizeable differences in discipline rates, grade level-retention, classification into special education, gifted and talented and Advanced Placement programs. The years studied were from 2011 through 2016.

Or to put it another way – Black students are suspended 1.5 times more frequently than their white classmates in the United States. And, on average, white students enroll in AP classes 1.3 times as often as Black students and have a 1.7 times higher likelihood to get into gifted programs, according to The Seattle Times.

So who’s the blame for the racial disparity? The study puts the blame largely on school districts, not families or their socioeconomic status.

“We want to shine the light back on schools directly so they feel compelled to explain to us why these racial differences (exist),” explained lead researcher Kenneth Shores, assistant professor of human development and family studies at Pennsylvania State University, reported The Seattle Times.

Nowhere are the racial disparity numbers more stark than in Seattle, according to The Seattle Times.

Previous studies have blamed the disparity in discipline partly on how Black students are viewed by teachers as less innocent compared with their white peers.