Rapper’s son takes to social media in retaliation and posts, 'F*ck Dwyane and his son' 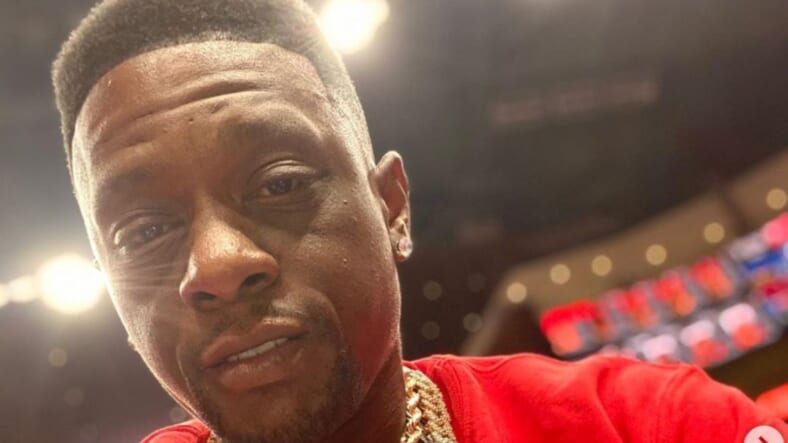 Boosie Badazz claims that he was put out of Planet Fitness because of an Instagram video he posted deriding former NBA star Dwyane Wade for supporting his transgender child. And Boosie’s teenage son also weighed in with his own offensive rant against Wade.

“Do not go to Planet Fitness, they racists, they haters,” the “Nasty Nasty” rapper said in an Instagram video. “They just put me out of Planet Fitness cause of what I said about Dwyane Wade’s son.”

Boosie captioned the post “MANAGER WHO WAS GAY REFUSED TO LET ME N PLANET FITNESS BECAUSE OF MY PAST ACTIONS ON SOCIAL MEDIA ABOUT GENDER ETC. DO NOT SUPPORT PLANET FITNESS” before listing the address of the location that gave him the boot. “THEy Racist ,THEY HAVE ROACHES , N THEY SHOWER WATER DONT GET HOT ‼️GET OUT YA FEELINGS LIL BITCH.”

Then his son, who goes by the IG name tootie_raww, posted on his IG story: “F*ck Dwayne [sic] and his son, idc he gay. My pops said what he said. Stop sendin gme that. I bet you won’t say it to our face.”

Recently, Wade and wife Gabrielle Union announced to the world their daughter, Zaya Wade’s change of name and gender identity. Although many people have been supportive of the announcement, some, like Boosie, have publicly ridiculed the news on social media.

“Don’t cut his f*cking d*ck off!” the Louisiana rapper said in an earlier video on IG. He recorded that transphobic video at the same gym on Feb. 18.

Boosie criticized Wade for supporting Zaya’s gender identity and warns that she is too young to make such a drastic decision.

“I gotta say something about this sh*t, bro. Dwyane Wade, you went too f*cking far, dawg,” he said in his IG video. “That is a male. A 12-year-old. At 12, they don’t even know what they next meal is gonna be. They don’t have sh*t figured out yet. He might meet a woman, anything, at 16 and fall in love with her. But his d*ck be gone—how he gon’—like, bruh, you going too far, dawg” Boosie said on the earlier video.

The Wades never said anything about Zaya undergoing gender reassignment surgery, but have just told their social media followers the pronouns Zaya has chosen to identify herself by.