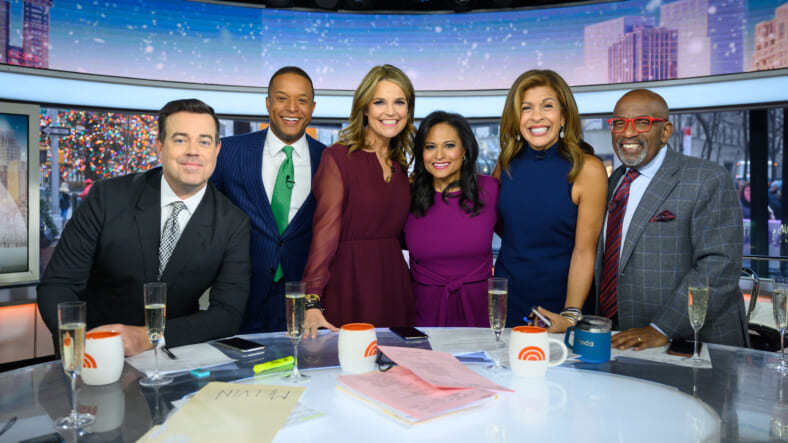 Al Roker came to Today viewers live from his kitchen Tuesday morning after a staff member of the show contracted the potentially deadly coronavirus.

Roker and Craig Melvin began self-isolating for 15 days after a staff member, who works as a producer for the third hour of the show, tested positive for the disease, reported Deadline. Savannah Guthrie and Hoda Kotb co-anchored the live show between the hours of 7 a.m. to 9 a.m., however, the third hour, which begins at 9 a.m. and is typically hosted by Roker and Melvin, aired segments that were previously taped, as did the 10 a.m. fourth hour.

Roker took to Twitter to announce his social distancing will not stop his weather reports. He said the technical crew came to his house and set him up to go “live from my kitchen.”

“Our crack #techsupport team at @nbcnews #fieldtransmission has my tech outfitted so I will be broadcasting from the Roker/Roberts #kitchen tomorrow am on @todayshow,” Roker tweeted. “Everybody’s fine here at the Roker household, and we will see you then.”

Our crack #techsupport team at @nbcnews #fieldtransmission has my tech outfitted so I will be broadcasting from the Roker/Roberts #kitchen tomorrow am on @todayshow and @3rdhourtoday pic.twitter.com/rONrLDb4RX

Roker added that he feels fine and has no symptoms. But he said people suffering from the disease were in his “thoughts and prayers” including “health care professionals and first responders.”

People responded to Roker’s Twitter announcement by applauding his decision to practice social distancing while still delivering the weather.

“You and the NBC tech support are the best. It is comforting to see you bring us the weather this morning. Thank you!” tweeted msms130.

After the announcement of the impacted employee, whom NBC News President Noah Oppenheim said was being treated for “mild symptoms,” Oppenheim said the network is “taking all necessary steps to ensure the health and safety of our teams, which includes multiple deep cleanings of our offices, control room, and Studio 1A.”

“We are fully supporting our colleague, who is experiencing mild symptoms and receiving medical care, and I know you join me in sending our very best for a quick recovery,” Oppenheim said, according to Deadline.