5 reasons ‘Little Fires Everywhere’ is a win for Kerry Washington

Hulu dropped the first three episodes of Little Fires Everywhere a bit early, and it’s a perfect distraction from the woes of being quarantined. 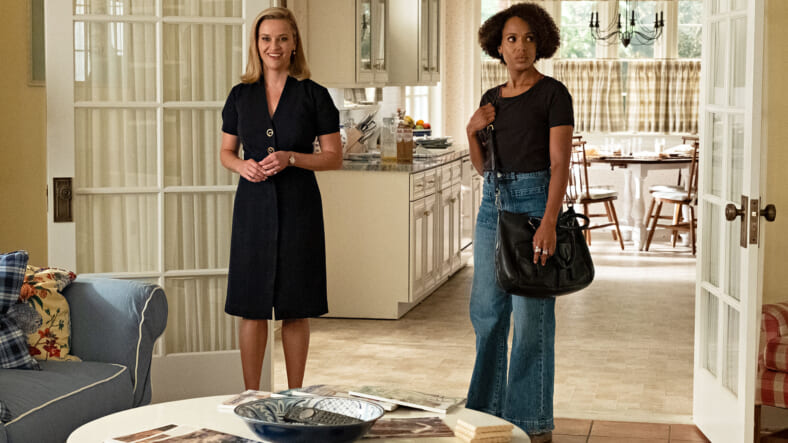 Hulu dropped the first three episodes of Little Fires Everywhere a bit early, and it’s a perfect distraction from the woes of being quarantined. The project, which stars Kerry Washington and Reese Witherspoon, is an adaptation of the best-selling book by Celeste Ng and it’s certainly worth a watch.

The story centers on the seemingly perfect Richardson family, Mia Warren (Washington), a single mother who’s new to town, and her daughter Pearl. Mia and Pearl seemingly upend their lives in an Ohio suburb. The story is one of secrets, motherhood and scandal as the characters deal with everything from arson to a controversial adoption of a Chinese-American baby.

Here are 5 reasons Little Fires Everywhere is a win:

Kerry Washington is a boss. In addition to starring in the eight-part series, Washington executive produced the project alongside Reese Witherspoon. Both women bring their own set of skills to the intense scenes and they don’t shy away from tackling tough subject matters like race and class.

A subtle shift makes a big difference. In the book, Washington’s character isn’t Black, and it’s incredible how much of a difference that one fact made when it comes to the core of the issues at hand in this riveting ride. Infusing the element of racial tension and biases creates another layer that forces both women to take risks and provokes some passionate reactions from viewers.

Tiffany Boone is back. The actress who excused herself from the cast of The Chi over misconduct issues with Jason Mitchell last year is back in a big way after returning to the small screen in Hunters. She’s the perfect person to portray a young version of Washington’s character, and she brings a certain charisma we missed seeing on the Showtime series we met her on.

Scandal-like twists. The plot of this series has almost as many twists and turns as Scandal. While Mia is certainly no Olivia Pope, you’ll be trying to piece together this puzzle from the get-go and the ending is worth the wait.

A welcomed distraction. It’s the little things like an early release of Little Fires Everywhere that help ease the stress of being quarantined. Why not let yourself sink into a binge-worthy drama that has nothing to do with #coronavirus. Two badass women taking command of the screen and telling a captivating story is a simple pleasure we all could appreciate.