In an exclusive interview with theGrio, the Hamiltons share a few things we don't already know about them. 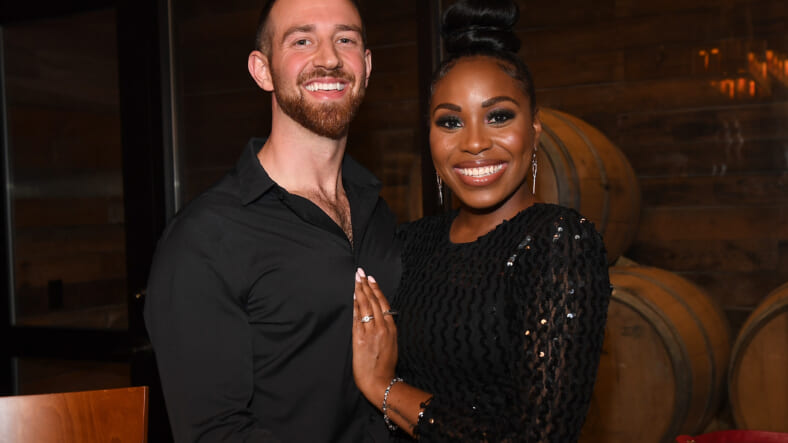 When Netflix unveiled their dating experiment Love Is Blind, few people believed any of the participants would actually find their soulmates. Fortunately, Lauren Speed and Cameron Hamilton proved us all wrong when they experienced a whirlwind romance before our very eyes.

The couple got engaged before ever seeing each other and tied the knot on the series nearly 18 months ago — and they have been happily married ever since. Now, the Hamiltons are getting used to the limelight and staying safe amid the coronavirus epidemic.

“I definitely have my mask and blue plastic gloves and I’m keeping the hand sanitizer on tap,” Lauren said as theGrio caught up with her and her hubby on the phone.

Bonnie & Clyde (minus the shoot up) ?? Photo By: Damon Dahlen for @huffpost Who’s binging #LoveIsBlind during the quarantine? ?? @netflix

Cameron admits that waiting so long between tying the knot and seeing the show play out was difficult.

“It was really tough because we wanted to see the journey that we went on and how it was captured and there was anticipation about it. We also knew it would be a long time until we got to see it so we had to try to put it out of our minds as best we could,” he said.

“There was a constant anxiety because we wanted to see how our story molded. Even though we lived it, seeing it was something else.

“The main shift is getting used to people recognizing us and coming up to us in the streets. We love the perks. Free clothes, meals,” Lauren said. “It has been all love and it’s like we have our own hive because when someone says something negative our supporters go after them.”

Now, they find themselves with throngs of fans and a knack for sharing their love with the public, so they’re continuing to chronicle their lives with the launch of their YouTube channel, Hangin’ With the Hamiltons.

We had some burning questions for the couple that stole our hearts with their love story. Check out the 6 biggest takeaways.

What is Cameron’s actual job?

We couldn’t help but wonder what a “scientist” actually does in this day and age so we got to the bottom of Cameron’s career.

“We didn’t determine the job titles they put on the show. I work in artificial intelligence. Basically, making computers and machines intelligent by building software to make that happen It can entail robotics, or recommendation systems or diagnosing diseases from reading data,” he explained.

“My major was pre-med in undergrad and in grad school I studied neuroscience and after that, I studied artificial intelligence.”

Aside from your race, how are you most different?

“I’m from the city and Cameron is a country boy. We have a lot of differences when it comes to that. I’m a city girl and I think everything is a horror movie out in the woods. It’s scary to me,” Lauren said.

“How we eat is kind of different and Cameron likes to stay up pretty late. I’m used to being in bed by 10. I love my sleep. When it comes to the type of entertainment we like, I like thrillers and drama but Cameron doesn’t like anything dark. He gets scared. He likes comedies.”

Who does the cooking?

Lauren’s hair is a vibe.

“I am constantly changing my hair. I get bored with a hairstyle quickly and I wear my hair to fit my mood,” Lauren explained. “I was rocking the layered bob before the show because that’s one of my chic, go-to looks and I had been at Paris Fashion Week. I also love a ponytail and I love braids. It’s a like a mood ring. It’s a totally different personality with each hairstyle I wear.

She added, “I wear the U-part wigs from time to time. I haven’t worn the full-lace yet. I love extensions and braids and changing the color. It’s all so fun. I tell Cameron he doesn’t have to cheat because I can just change my hair and be a new person.”

What made you cringe?

“For me the biggest thing was the rap for a lot of reasons. The way it was edited; they put a beat over it that was not even the same tempo of the rap and they edited it and cut out sections in the middle. The timing sounds off. I don’t understand that edit at all,” Cameron shared. “I don’t regret doing it but it was kind of cringe to watch.”

Lauren admits she had reservations about the rap too.

“I was a little nervous about the rap for Cameron. It was good though,” she said. “I knew it could go one of two ways. Social media could tear into him or they could really love it so I was nervous about that for sure.”

They’re not done with reality TV.

As a content creator, Lauren is perfectly suited to keep sharing her romance with the world and she has taken the lead on their latest YouTube project.

“We actually thought about it after we wrapped Love is Blind. With all the support we knew we had to keep this going and with me being a content creator, it just makes sense,” Lauren said.

“I’m filming and editing. It’s current stuff but we may throw in some past stuff because we were filming that whole 18 months.”

“It’s fun and we love working together. It’s a win-win. She’s setting up the camera and the shots and we discuss the ideas together. I’m the co-pilot,” he said.

“Thanksgiving, bringing our families together, Christmas, events, and adventures that we’ve had were all captured.”