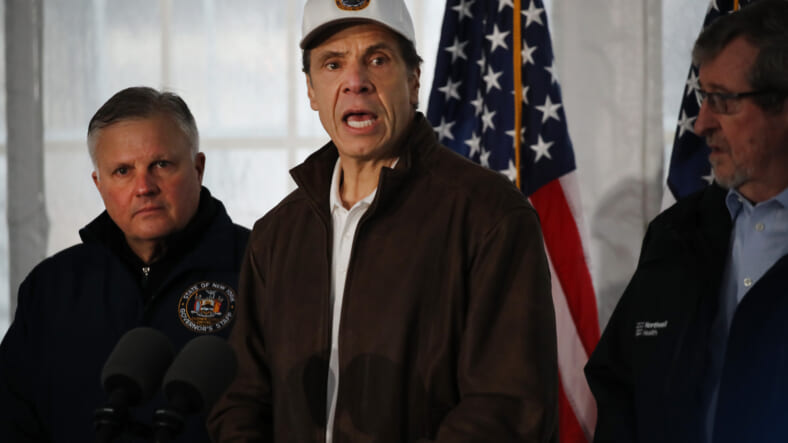 New York Governor Andrew Cuomo speaks to the media and tours a newly opened drive through COVID-19 mobile testing center on March 13, 2020 in New Rochelle, New York. The center serves all parts of Westchester County and will test up to 200 people today, growing to up to 500 people per day in the coming days. New Rochelle, a city just north of New York City, has become the state’s largest source of coronavirus infections, prompting Governor Andrew Cuomo to implement the one mile radius “containment area” as the nation sees a daily increase in the number of virus cases. (Photo by Spencer Platt/Getty Images)

New York state joined California on Friday in ordering nearly all residents to stay home, as governors watched with growing alarm as southern Europe buckled under the strain of the coronavirus outbreak.

“We’re going to close the valve, because the rate of increase in the number of cases portends a total overwhelming of our hospital system,” New York Gov. Andrew Cuomo said as cases in the state climbed to more than 7,000.

Cuomo said is he directing all workers in nonessential businesses to stay home and banning gatherings statewide. The move came after California, the nation’s most populous state, with some 40 million people, all but confined its population in the biggest lockdown in the U.S. 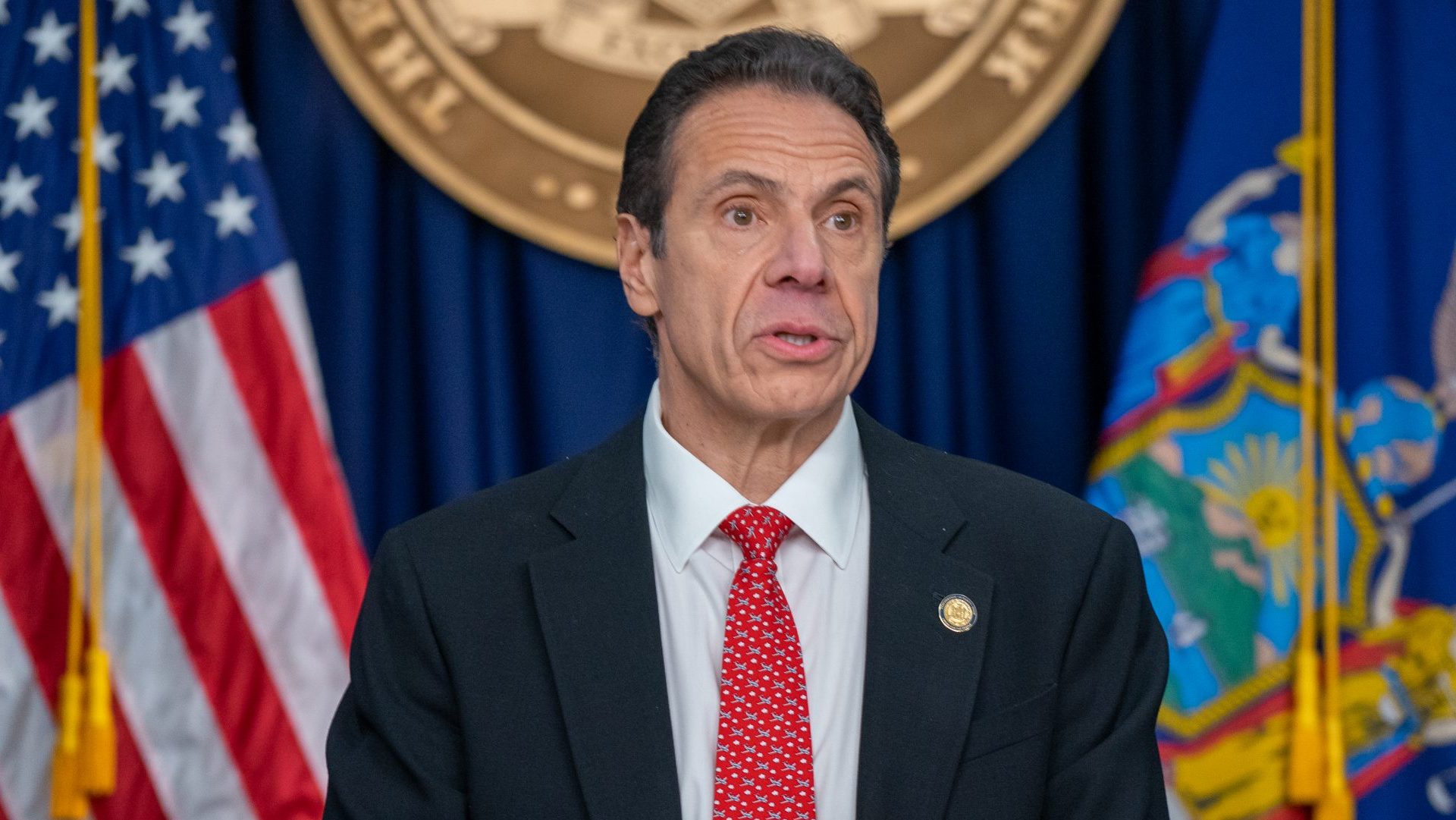 New York state Gov. Andrew Cuomo speaks during a news conference on the first confirmed case of COVID-19 in New York on March 2, 2020 in New York City. A female health worker in her 30s who had traveled in Iran contracted the virus and is now isolated at home with symptoms of COVID-19, but is not in serious condition. Cuomo said in a statement that the patient “has been in a controlled situation since arriving to New York.” (Photo by David Dee Delgado/Getty Images)

The increasingly drastic measures in the U.S. came as gasping patients filled the wards of hospitals in Spain and Italy, and the global death toll surpassed 10,000, with the virus still multiplying and gaining footholds in new corners of the world.

Countries frantically prepared for an onslaught of patients in the coming weeks.

In Britain, the government asked 65,000 retired nurses and doctors to return to work. A convention center and hotels in Madrid were being turned into field hospitals for nearly 10,000 patients. France’s military worked to build a makeshift medical center in the hard-hit town of Mulhouse. The U.S. readied military hospitals for civilian use, and more than 4,000 National Guard members were deployed in 31 states to help distribute food, scrub down surfaces and help in other ways. 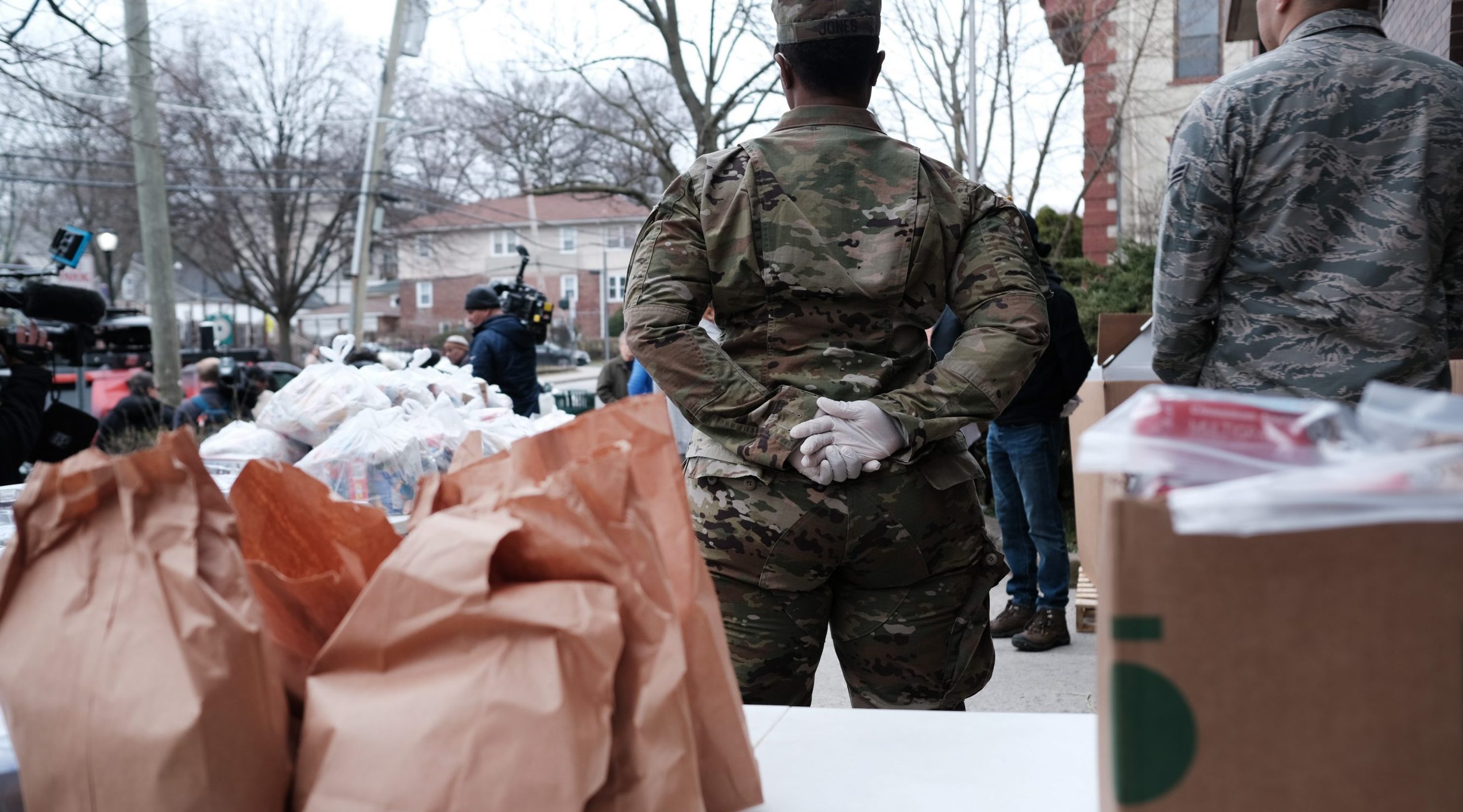 Members of the National Guard hand out bags of food to residents near a one-mile radius “containment area” set up to halt the Coronavirus (COVID-19) on March 12, 2020 in New Rochelle, New York. New Rochelle, a city just north of New York City, has become the state’s largest source of Coronavirus infections, prompting Gov. Andrew Cuomo to implement a containment area as the nation sees a daily increase in the number of virus cases. (Photo by Spencer Platt/Getty Images)

The Trump administration warned Americans abroad to return home or risk spending an “indefinite” period away. And the income tax filing deadline was moved from April 15 to July 15.

“We’re about to enter into a new way of living here in Los Angeles,” Mayor Eric Garcetti said as California went into lockdown, with people told venture outside only for essential jobs or errands and some exercise. “What we do and how we do it and if we get this right will determine how long this crisis lasts.”

The virus has stuck at the very identities of many countries: closing down cafes, restaurants and boulevard life in France, ending la dolce vita in Italy, forcing the cancellation of the ceremonial changing of the guard at England’s Buckingham Palace and wrecking sales of tulips in Holland.

In Bergamo, the epicenter of the outbreak in Italy, cemeteries were overwhelmed. Patients at the city’s main hospital lined up in a narrow ward, struggling for breath as doctors and nurses moved swiftly from one beeping machine to the next.

“When the virus arrived here, there was no containment and it spread through the valleys very quickly. … Some said it was the normal flu. We doctors knew it was not,” said Dr. Luca Lorini, head of intensive care at the hospital, where nearly 500 beds were dedicated to people suffering severe symptoms of the virus. Eighty of the patients were in intensive care.

In the Italian farm town of Fondi, home to a wholesale produce market serving Rome and Naples, a new ordinance banned all but essential people from entering or leaving after 40 elderly residents became infected.

At a convent on the outskirts of Rome, 19 of 21 nuns were infected, according to the Italian daily Il Messaggero. A Vatican decree absolved the sins of the faithful who were sick or in quarantine, as well as those of their caregivers, if they met certain conditions.

“Certain medical centers are suffering stress that is reaching the limit,” said Fernando Simón, director of Spain’s center for health alerts and emergencies. “The difficult days in which we must bear down are coming now. We must keep our focus.”

Although the illness is mild in most people, the elderly are particularly susceptible to serious symptoms. Italy has the world’s second-oldest population, and the vast majority of its dead — 87% — were over 70.

Some of the only good news came from Wuhan, the Chinese city where the outbreak began and were hospitals were struggling just weeks ago. For the second day in a row, no new infections were reported and only 39 cases were recorded nationwide — all brought from the outside, the government said.

With the crisis waning, China has begun sending medical supplies to Europe.

The effects of the global economy grinding to a halt took their toll, from millions of unsold flowers rotting in piles in Kenya to the slow emptying of the world’s skies.

In the U.S., Congress worked to put together a $1 trillion emergency package to prop up industry and small businesses and dispense relief checks of $1,200 for adults and $500 per child.

In Nevada, where Las Vegas casinos were shut down on the governor’s orders, casino manager Patricia Beck lamented: “I know why he did it. I get it. But they don’t understand the impact of a four-hour notice that your life’s over.”

Scientists advising the British government warned that restrictions on daily life may have to be in place for a year, with periods of less stringent and more stringent measures.

Governments are trying to balance locking down residents with the need to keep food, medicine and other essentials flowing. In Britain, the category of vital workers includes doctors, nurses and paramedics — and also vicars, truckers, garbage collectors and journalists.

“We need to keep the country running,” Macron said.

Worldwide, the number of infections exceeded 244,000, according to a Johns Hopkins University tally.

More than 86,000 people have recovered, mostly in China.

Iran’s official toll of more than 1,400 dead was rising quickly as well amid fears it is underreporting its cases. Tehran accused Washington of helping spread the virus by retaining sanctions that prevent it importing desperately needed medicine and medical equipment.

As the virus strengthened its foothold in Africa, the continent’s busiest airport, in Johannesburg, announced that foreigners will no longer be allowed to disembark.