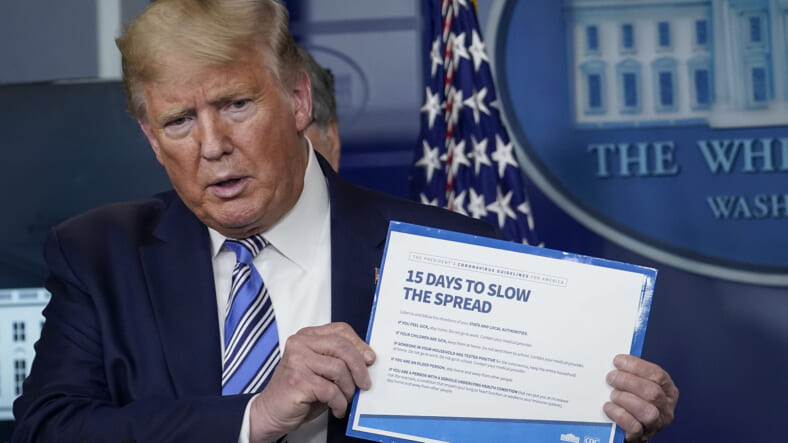 U.S. President Donald Trump speaks at the daily coronavirus briefing at the White House on March 23, 2020 in Washington, DC. With the number of deaths caused by the coronavirus rising and foreseeable economic turmoil, the U.S. Congress continues to work on legislation for the nearly $2 trillion dollar aid package to deal with the COVID-19 pandemic. (Photo by Drew Angerer/Getty Images)

A Phoenix, Arizona man has died and his wife is in critical condition after the couple took chloroquine phosphate after they heard President Donald Trump say the drug could be effective at treating the coronavirus.

Banner Health confirmed the man’s death and the wife’s critical treatment in a statement, in which they warned others against taking the drug to self-medicate from the disease, or as an attempt to try and prevent contracting the virus.

During his daily White House briefings and in subsequent tweets, President Trump has promoted chloroquine as a possible “game-changer” for treating Covid-19, while health officials warn it is too premature to draw any connection to the drug’s effectiveness in treating the coronavirus.

2 days after Trump says hydroxychloroquine was the “biggest game changer in the history of medicine”, a person died of chloroquine poisoning. pic.twitter.com/k3hmWQ5KGE

Chloroquine is “an additive commonly used at aquariums to clean fish tanks,” Banner Health wrote in its statement, according to CNN. Banner Health leaders said the drug “should not be ingested to treat or prevent this virus.”

“Given the uncertainty around COVID-19, we understand that people are trying to find new ways to prevent or treat this virus,” Dr. Daniel Brooks, Banner Health’s Poison and Drug Information Center medical director, said in the statement. “But self-medicating is not the way to do so.”

The Arizona man was in his 60s, as is his wife.

NBC News interviewed the wife and was told that the couple didn’t have a prescription for the medication, but instead ingested the stuff that she once fed her koi fish. The wife said she and her husband watched the White House daily briefing when Trump touted the medication’s potential effectiveness and decided to give it a try.

“I had (the substance) in the house because I use to have koi fish,” the wife told NBC News. “I saw it sitting on the back shelf and thought, ‘Hey, isn’t that the stuff they’re talking about on TV?’”

NBC News reports the couple mixed a small amount of the fish tank cleaner in with another liquid and drank it as a way to prevent the coronavirus.

“We were afraid of getting sick,” the wife told the network.

Less than 30 minutes after drinking the concoction, the couple “experienced immediate effects requiring admittance to a nearby Banner Health hospital,” according to the Banner Health statement.

In addition to the Arizona death, Nigeria health officials are also issuing a strong warning about chloroquine, after three people in the country have overdosed on the drug, CNN reported.

A Lagos state official said the three people were hospitalized after taking the drug.