Netflix ‘Tiger King’ doc is messy and a must watch

The central plotline revolves around Joe Exotic, who is currently behind bars, convicted of the murder-for-hire plot against his cat-loving rival (and fellow wackjob) Carol Baskin 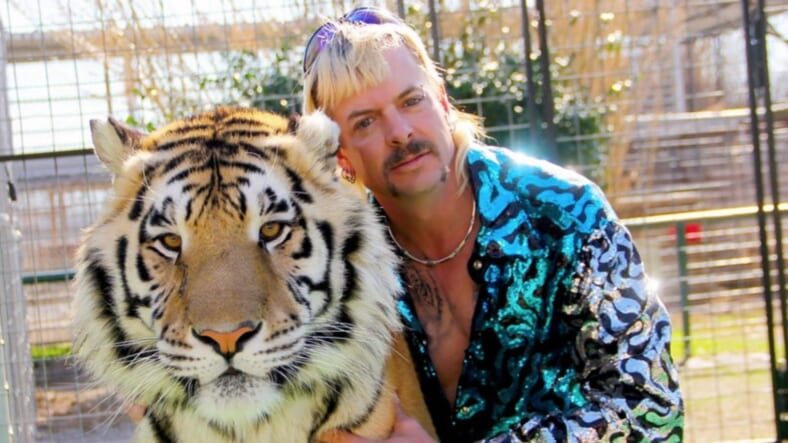 If you haven’t seen Tiger King: Murder, Mayhem and Madness yet on Netflix, you’re gonna want to take some time this weekend and get ready for your jaw to hit the floor.

The latest true crime docuseries from Netflix has helped the quarantined time fly by for viewers like 2 Chainz and Cardi B who can’t rip themselves away from the unimaginable trainwreck that proves white folks are into some really crazy sh*t.

We won’t give away too many spoilers because the nonstop twists and turns are part of the fun of this mind-blowing tale. Below should entice you to give it a try.

#TigerKing There’s no downtime in this docuseries. This is me the entire time. pic.twitter.com/lEn2C54cuV

Here are 5 reasons to watch:

Everyone owning big cats and other exotic pets up here is the most normal thing about this show #TigerKing pic.twitter.com/JiGj0quEWY

One thing you will NOT see in this docuseries? Black folks. Nowhere. None. (With the exception of a very small and insignificant snippet of SHAQ) You know why? This level of foolishness is reserved for the white folks of the world. Tigers as pets?

2. Pettiness at its peak.

Joe Exotic when he finds out Carole is making money off of tigers, not paying her staff, AND making music videos #TigerKing pic.twitter.com/OdfPvvXnWZ

The central plotline (although there are thousands) revolves around Joseph Maldanado-Passage aka Joe Exotic, who is currently behind bars. He’s convicted of a murder-for-hire plot against his cat-loving rival (and fellow wackjob) Carol Baskin. Joe Exotic owns a big ass zoo in Oklahoma where he breeds big cats and he may be the pettiest person in the history of ever.

3. There are tons of tigers.

Joe Exotic's staff watching him get dragged around by tigers has me in tears #TigerKing
Joe: screaming and shouting
His staff silently watching the liger attempt to maul him: pic.twitter.com/H42GShkkTb

Granted, many of the tigers are stuck in cages, but it’s still kind of incredible to see so many variations of big cats. Even more amazing is the fact that these enormous, deadly animals act like house pets more often than not. But also, sometimes they rip off people’s arms and attack their owners. White tigers, ligers, lions, leopards, black panthers, and cheetahs are just a few of the guest stars of this wild ride.

When a documentary starts out with:

“The monkey people are a little bit different. You know, their kind of strange, but the big cat people are back-stabbing pieces of shit.”

The details of this story are so wild, it’s hard to believe they could be true. But they are. Even after binging this show for hours, you won’t have any idea who you’re actually rooting for. Just when you think you’ve solved a piece of the peculiar puzzle, someone will step into the next scene and stomp all over your theories.

5. It’s funny as hell without trying to be.

After finishing up #TigerKing, everything I wanted to watch next seems to pale in comparison. I never knew a doc series about a fringe-jacket-wearing frizzy-blonde-mullet-haired psychotic gun-toting gay polygamist exotic animal zoo owner would ruin me. I'm flabbergasted. pic.twitter.com/RFP48jZ6XA

The idea of gorgeous, majestic animals being abused by the literal scum of the earth is not funny, per se, but the crazy cast of characters we meet in these mind-blowing series will make you bust a gut or two. The realization that these people are actual humans and not part of some hilarious skit about the depths of stupidity is actually baffling.

SO much so, you’ll ask yourself, What in the hillbilly hell is going on?