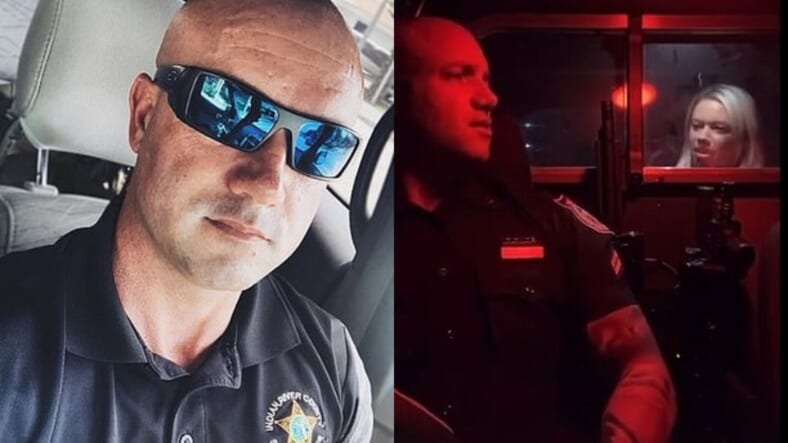 A white sheriff’s deputy in Florida is facing backlash after it was reported that he has been producing Tik Toks full of racially insensitive content and regular usage of the “N word.”

READ MORE: NYPD cops accused of using covert signals to warn each other when body cameras are on

According to the report, “Indian River County Sheriff’s Deputy Michael Dilks who, in his uniform at the wheel of his marked SUV and at times with Heidi Dilks, his medical tech wife, lip-synced spoken lines from black actors or hip-hop tunes using a variety of racists and sexist terms like ni**a and bi**h.”

Dilks, who has over 60,000-plus Tik Tok followers, admitted he made the videos but claimed he produced “95 percent of them” while off-duty.

However, in one particularly egregious clip, he is shown sitting in his service SUV pretending to take his wife to jail. His service shotgun is visibly propped up behind the seat while his wife dubs the voice of a Black man.

Local NAACP President Anthony J. Brown deemed the videos “racist” according to The Miami Herald. The deputy denied the charge while lip-synching the 2018 rap song “White Boy” by Tom MacDonald.

“I would never judge a human for the cards he was given or call him lesser than myself ‘coz of the race he was mixed with,” he said.

It’s also worth noting that Indian River is a tiny county located just north of Palm Beach where authorities have yet to desegregate schools over 50 years after the U.S. Supreme Court ordered school boards nationwide ensure minorities had access to good institutions.

Not surprisingly, due to this social climate, the reaction to the videos has been split down racial lines with white residents in large finding them humorous. Black residents said the clips are just a glimpse into how law enforcement sees minority residents in the community.

The video with the N-word was taken down an investigation is pending.

“We are aware of the situation and currently conducting an internal inquiry,” Eric Flowers, IRCSO public information officer emailed the Miami Herald Monday.