The state's chapter of the Sons of Confederate Veterans celebrated: 'God bless the Confederate Soldier... He shall never be forgotten' 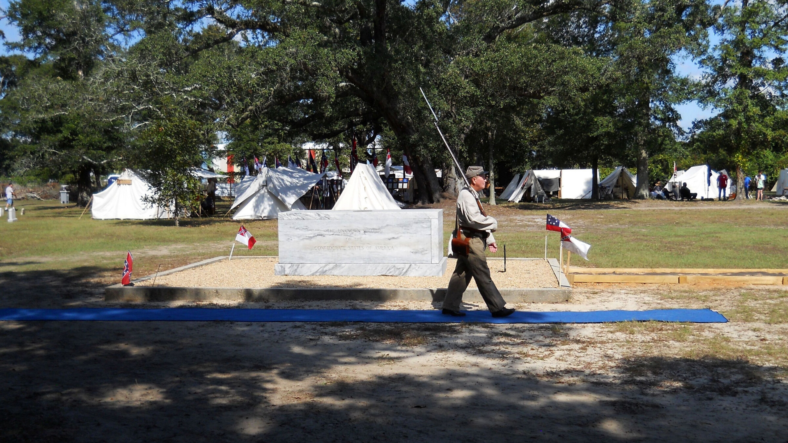 Honor guard during Fall Muster at Tomb of the Unknown Confederate Soldier on the grounds of Beauvoir in Biloxi, Harrison County, Mississippi, USA (Wikimedia Commons)

Mississippi Gov. Tate Reeves has declared April “Confederate Heritage Month” as his way to honor Confederate soldiers who fought in the Civil War.

The Republican governor’s proclamation says “April is the month when, in 1861, the American Civil War began between the Confederate and Union armies, reportedly the costliest and deadliest war ever fought on American soil and whereas state law declares the last Monday of April as Confederate Memorial Day, a legal holiday to honor those who served in the Confederacy,” before going on to declare that the entire month would be set aside to honor Confederate soldiers.

“As we honor all who lost their lives in this war, it is important for all Americans to reflect upon our nation’s past, to gain insight from our mistakes and successes, and to come to a full understanding that the lessons learned yesterday and today will carry us through tomorrow if we carefully and earnestly strive to understand and appreciate our heritage and our opportunities which lie before us,” the proclamation continues.

The Mississippi Division of the Sons of Confederate Veterans seemed ecstatic about the acknowledgment. “God bless the Confederate Soldier. He shall never be forgotten. Deo Vindice!” the group posted on Facebook. “Deo Vindice,” is Latin for “Under God as our Vindicator.”

Confederate soldiers fought to uphold slavery across the South. Eleven states, including Mississippi, seceded from the United States and attempted to form the Confederate States of America (CSA) in protest of continuing “the peculiar institution” but their efforts were fought by pro-Union states, which ultimately resulted in the Civil War.

The South lost. Yet, some areas like Mississippi still proudly wave the Confederate flag and hold on to their Confederacy heritage.

Reeves’ proclamation comes as he has faced criticism in his leadership in how he’s handled the novel coronavirus pandemic. According to the Jackson Free Press, Reeves initially refused to shut down nonessential businesses but later changed his mind and ordered residents to stay home. But his delay caused backlash and cases grew across the state.

HuffPost reported last year that while at Millsaps College in Jackson, Reeves was a member of Kappa Alpha Order, a fraternity known for its pro-Confederate stance and for having run-ins with Black students, issues that haunted him when he ran for governor. In one incident, fraternity members wore Afro wigs and tied Confederate flags around their necks. Some wore blackface, according to an article in The Clarion-Ledger.