It comes as no surprise that the habitually, politically incorrect, conservative political commentator's statistics and facts are incorrect 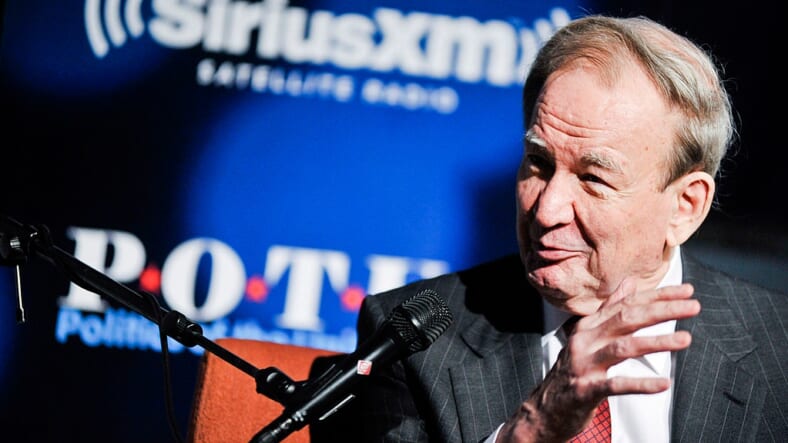 With a political push for reparations back in the limelight after several Democratic presidential candidates say they favor the country compensating Black people for slavery, Pat Buchanan, conservative political commentator, essentially says payment isn’t needed because soldiers who died in the Civil War already paid the price.

According to Buchanan’s voodoo mathematics, America doesn’t owe the descendants of slaves a red, hot cent because there were more soldiers who died in the Civil War than Africans brought to the United States as slaves. So, according to Buchanan, it’s a wash.

“[I]n the whole period of slavery, I think you had 600,000 people brought to the United States under involuntary servitude, or slavery, and 620,000 died in the Civil War, Americans. So, the expiation, I think, was done, you know,” Buchanan said this past week during an interview on The Laura Ingraham Show Podcast, according to Newsweek Magazine. Buchanan was on the show to discuss a New York Times column by David Brooks, where Brooks details how he went from not believing in reparations to supporting the move.

On the podcast, Laura Ingraham asks Buchanan, who formerly worked as White House Director of Communications under President Ronald Reagan, what he thought of reparations. Buchanan does not divulge where he got his data, but it’s wrong.

Trans-Atlantic Slave Trade Database cites the number of African slaves first brought to America as 390,000, but this in no way accounts for the millions of children and children’s children born from enslaved Africans once in America. That number, according to the 1860 U.S. census, was more than 3.95 million slaves across this country.

Now, newly elected Democratic legislators are hoping to make some traction with reparations.

New York Representative Alexandria Ocasio-Cortez reportedly said reparations are needed not just as recompense for slavery but also to make right centuries of racist practices in many different industries – from banking to real estate.

READ MORE: And Another One: Third R. Kelly sex tape turned over to authorities

“[R]eparations are for the damage done by the New Deal and redlining because that is where we saw a compounding of the existing inequity from the legacy of slavery, where we drew red lines around black communities,” Ocasio-Cortez said, according to Newsweek. “We said white communities will get home loans and they will get access to the basic bedrock of wealth in America and this will be your heirloom and we gave white America the heirloom that appreciated overtime— that people still benefit from today and we did not give to African-American and Mexican communities, Puerto Rican communities.”

Buchanan said he’s ok letting the country decide. While speaking to Ingraham, he told her that Democrats “will lose the country in the next election to Trump, handily,” if they try to force Americans to pay for reparations.