Diamond and Silk suggest COVID-19 is a Tuskegee-like conspiracy

The Trump supporters have their say on the coronavirus pandemic 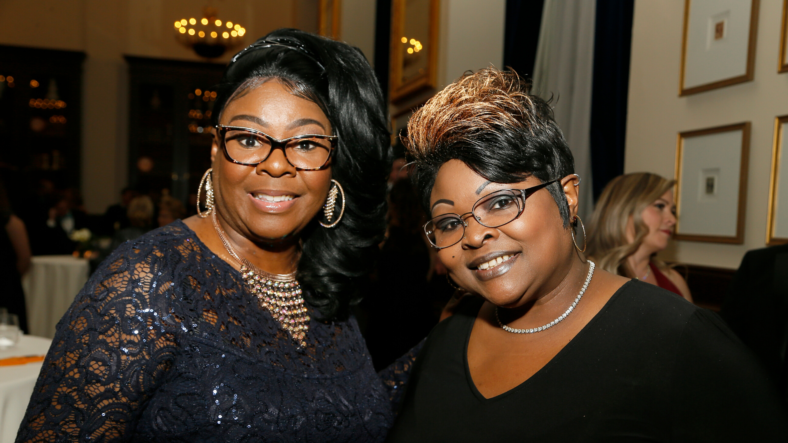 WASHINGTON, DC – JANUARY 17: Fox Nation contributors Diamond (L) and Silk (R) attend the Save the Storks 2nd Annual Stork Charity Ball at the Trump International Hotel on January 17, 2019 in Washington, DC. (Photo by Paul Morigi/Getty Images for Save the Storks)

Diamond and Silk, the African-American women who have gained dubious fame as rabid Donald Trump supporters, believe that it’s time for the quarantine to be over and want everyone out of the house now.

The duo tweeted Wednesday that social distancing has run its course. The government advises that people stay inside their homes to stop the spread of the novel coronavirus and stay six feet apart while in public. Though they are not government officials nor infections disease specialists, Diamond and Silk weighed in on the crisis.

“The only way we can become immune to the environment; we must be out in the environment. Quarantining people inside of their houses for extended periods will make people sick!” they tweeted. (The tweet has since been removed by Twitter, for violating its terms of content.)

They also thought Black people were being set up to become guinea pigs.

Dr. Fauci and Dr. Birx have made it clear that COVID-19 severely impacts African Americans. If they think they are about to make Black people the Guinea pigs for their vaccines experiments, they have another thing coming. This reminds us of the Tuskegee experiment all over again!

“Dr. Fauci and Dr. Birx have made it clear that COVID-19 severely impacts African Americans. If they think they are about to make Black people the Guinea pigs for their vaccines experiments, they have another thing coming. This reminds us of the Tuskegee experiment all over again!”

Social media didn’t have the time for it and let their feelings be known.

Could you maybe content yourselves with being talentless hacks who have made a career of failing upward, and maybe draw the line at not encouraging people to get killed?

Great advice for Trump supporters. Get out there and lick some shopping cart handles while you are at it.

Diamond and Silk most likely won’t be fazed by the backlash. Just last week, not only was their mental stability questioned, they were told “they need Jesus”. This was in response to their assertion that the deaths attributed to COVID-19 were exaggerated to make the president look bad.

“In a two week time period, over 1,000 people after being tested positive have died from the coronavirus,” Silk said. She specifically pointed to a 39-day stretch from January when she said the first person in the U.S. died of COVOID-19, until the end of February.

“Here’s another thing,” Silk started and Diamond said, “Come on…”

Diamond said she knew what would happen next.

“At the time, he said there was 25,489 cases with 307 deaths. Instantaneously, you had the media calling President Trump out, he want it open by Easter, he want this open by Easter – me and you was talking, I said now watch the number of deaths go up,” Silk said. “Watch everything increase because they want to make it look bad in front of our eyes.”

As of today, according to the N.Y.Times, there are over 400,000 confirmed cases of the COVID-19 virus in the U.S., with over 14,00 deaths recorded, likely an undercount due to the lack of comprehensive testing.