Africans racially profiled, harassed in China due to coronavirus

Africans have been illegally evicted, forced to undergo COVID-19 testing and quarantine 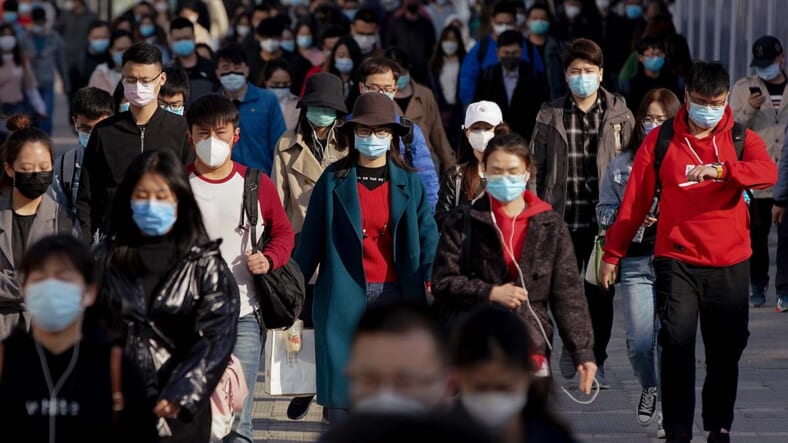 In this April photo, commuters in Beijing, China wear protective masks as they exit a train at a subway station during Monday rush hour. (Photo by Lintao Zhang/Getty Images)

Africans living in China are reporting increased harassment allegedly due to coronavirus fears.

As the Asian continent reopens two months after the coronavirus was first detected in the city of Wuhan, African nationals in Guangzhou are saying they are being targeted, CNN reported.

According to CNN, Africans have been illegally evicted, forced to undergo COVID-19 testing and quarantine. After seeing video and hearing accounts of the treatment of their countrymen, the African media has denounced China in newspaper reports and on TV in several countries.

Africans sleeping on the street in China

Cruelty against Africans In China:

Africans living in China are living a very hard life. They are in danger.

African countries having citizens in China should immediately organize an evacuation operation.

They are mostly students.

This is despite the increasingly cozy relationship between African nations and China, resulting in $208 billion in trade between the two in 2019, according to China’s General Administration of Customs. A Nigerian lawmaker, Oloye Akin Alabi, posted a video of his conversation with a Chinese official asking about the treatment of Nigerians in China.

Mr Speaker reads the riot act to the Chinese ambassador: We will not tolerate maltreatment of Nigerians in China!!! pic.twitter.com/gblIVVynNz

Though China is considered an authoritarian government that places limitations on the rights of its own people, as evidenced by their draconian response to stopping the spread of the coronavirus, Chinese Foreign Ministry Spokesperson Zhao Lijian tweeted that the country will not allow racial intolerance within its borders.

Our attitude is clear, firm & consistent: ZERO tolerance for racial discrimination. NOTHING can change such a position. Communication, including constructive criticism is welcome. That will help any party concerned to improve its working methods & reduce misunderstanding. https://t.co/CoxINwnmJm

Yesterday, the Chinese ambassador to the African Union, Liu Yuxi, also tweeted out his support for African nationals in China and his goal to ensure no racial profiling takes place.

China&Africa have forged time-tested ties too strong to be affected by sporadic incidents or attempts to sow discord. https://t.co/fYjwBEdHIw

Yet there are multiple reports that this kind of discrimination continues. A Twitter account that covers life for Africans and African-Americans in China, has posted multiple tweets of ongoing discrimination and support and resources for those who have been impacted.

The speed with which news of these incidents have spread and been shared by popular bloggers, YouTubers and even motivational speakers back home has been interesting to see. This will not be going away any time soon pic.twitter.com/yRfMWt5Ifh

CNN said that due to the mobilization of volunteers via WeChat, most of the displaced Africans had found shelter. Some were rounded up and quarantined, while others were matched with landlords and hotels that would rent to them. It seemed apparent that the Chinese wanted them off the streets if only to staunch any criticism from their African partners in trade.

“If they are not handled properly they can result in far larger consequences than people sleeping on the street,” British/Kenyan entrepreneur Hannah Ryder, the CEO of a Kenyan owned company in Beijing told CNN.

“They can have repercussions on international relations, trade and even diplomacy.”