Dr. Armen Henderson, a University of Miami internist who made headlines for testing homeless people for COVID-19, was accused of dumping trash in the neighborhood 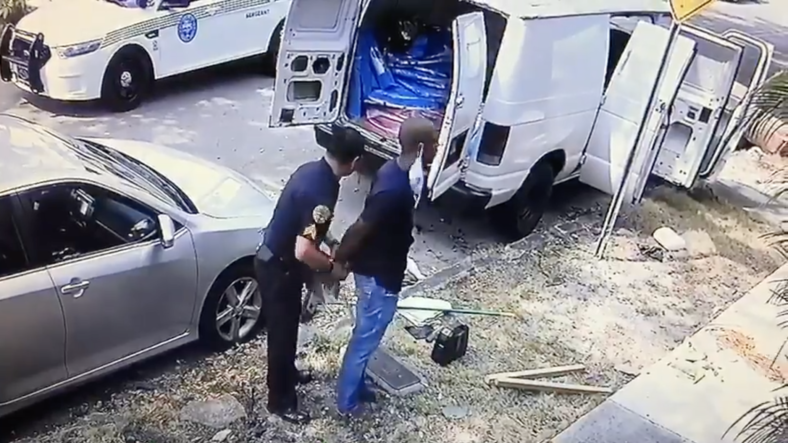 Dr. Armen Henderson, a University of Miami internist lauded for testing homeless people for COVID-19, was handcuffed after being accused of dumping trash.

With all the news surrounding the coronavirus, it’s easy to overlook the fact that Black people continue to fall victim to excessive policing and abuse, as was the case for a Miami medical doctor.

Dr. Armen Henderson, a University of Miami internist who made headlines for testing the homeless for COVID-19, was handcuffed on Friday by a police officer in front of his house after failing to show his identification. Henderson, according to the Miami Herald, was placing old boxes on the front curb of his home for pickup when a police officer approached him regarding complaints of trash dumping in the neighborhood.

READ MORE: NYU ICU nurse sobs after ‘walking into rooms and your patients are dead’ from coronavirus

Henderson said that although he never cursed or antagonize the office, he proceeded to cuff him.

“He said ‘you should refer to me as sir, or sergeant when talking to me.’ I never said I was a doctor. But I didn’t cuss,” Henderson said in describing the incident to the newspaper. “He just grabbed my arms and cuffed me.”

Henderson then screamed for his wife, who was inside their home. When she came out with his ID, the cop removed the cuffs.

The doctor did not file a complaint with the Miami Police Department after the incident, hinting at distrust for the organization. The department took to Twitter Saturday morning to acknowledge the public’s concerns, announcing that an investigation of the matter has been launched.

We are aware of a video circulating on social media involving one of our patrol sergeants handcuffing a resident in the Flagami NET area. An internal affairs investigation is underway and is looking into the incident.

“I just got accosted by police,” Henderson told the Miami Herald reporter. “Why would I call them?”

Weeks prior, Henderson was one focus of a Miami Herald story highlighting efforts to test homeless people for coronavirus in Florida.

The doctor set out with dozens of volunteers, despite Miami-Dade County’s order to stay off the streets. Multiple local nonprofit organizations were involved in the initiative. Henderson called it an act of “civil disobedience.”

“I feel this is essential to protecting the public’s health,” Henderson said.

Florida has recorded nearly 18,000 coronavirus infections in the state as of Saturday afternoon, according to Johns Hopkins University data. More than 400 people in the state have died of COVID-19, including 84 in Miami-Dade.

Nearly 504,000 people have contracted the virus across the United States.