Sean Hannity and Trish Regan named in the lawsuit for saying COVID-19 was a 'hoax,' a 'conspiracy,' and similar to 'the flu' 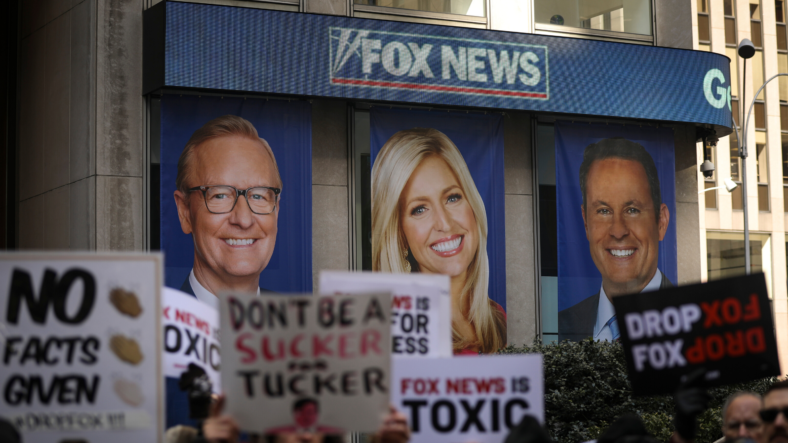 Protesters rally against Fox News outside the Fox News headquarters at the News Corporation building. (Photo by Drew Angerer/Getty Images)

Fox News filed a motion in court on Tuesday requesting that a Washington state judge throw out a lawsuit that accuses the network of spreading fake news about the coronavirus and posing a threat to public health.

In the court filing, Fox News denies that its TV hosts, Sean Hannity and Trish Regan, ignored the severity of the pandemic, and said statements the show hosts made are covered under the First Amendment, according to The Hill.

Regan and Hannity were singularly mentioned in the lawsuit for pushing the narrative that the coronavirus is a “hoax” and “conspiracy,” or that it was similar to the common flu.

“The claims here are frivolous because the statements at issue are core political speech on matters of public concern,” Fox News wrote in its motion to dismiss, according to The Hill. “The First Amendment does not permit censoring this type of speech based on the theory that it is ‘false’ or ‘outrageous.’ Nor does the law of the State of Washington.”

The lawsuit against Fox was filed on April 2 by the nonprofit group, Washington League for Increased Transparency and Ethics. It basically contends that Fox is at fault for spreading lies and misinformation during a public health crisis – which pushes the parameters of free speech.

In addition, dozens of journalists and journalism professors sent an open letter to Fox News heads Rupert and Lachlan Murdoch protesting the misinformation that the network allows from its hosts. As a result of the criticism, Fox Business temporarily pulled Regan’s show after she said the coronavirus is “another attempt to impeach” President Trump.

The complaint alleges that Fox News violated Washington state’s consumer protection statute, by “willfully and maliciously” spreading false news the past two months to its 2.5 million viewers, in which the average viewership age is 65.

Hannity, however, defended his coverage, telling Newsweek there is “irrefutable evidence that I have taken this seriously way before most in the media did.”

Meanwhile, Elizabeth Hallock has withdrawn as the lawyer representing Washington League and has been replaced by Catherine Clark.

“This case asks what are we doing to each other as a country when we’re under such an order from the government over something so vicious and pernicious as this disease, where nobody has herd immunity,” Clark told The Hill.